Since we liked the the Fitz Roy track so extraordinarily much, we decide to explore the area around El Chalten a little bit further. At night, the wind is so strong that the deafening noise of the flying canvas lets us hardly sleep. We leave the mountains and a backpacker-flooded hostel behind us to approach the Carretera Austral. The plum street is known for its numerous national parks. However, it also has the reputation of a rather adventurous road, because it largely consists of dirt roads.

A Fight to get to Perito Moreno

But until we finally get there, we have to overcome a few kilometres through the wasteland. Since there are no protected wildcamping spots along the route, we have to fight for hours through cold and finally through darkness. When we arrive in the small town of Perito Moreno (right, it has the same name as the mountain and the glacier we visited many kilometres ago), it is already 10 at night. We’re happy that we made it. The violent headwinds caused the fuel consumption gauge to fall faster than ever, and we had doubts whether we would still be able to arrive despite riding in the fifth gear at a snail’s pace. With shivering hands, I’m looking for a campsite on my phone. A small one is very close – so let’s go! I get off the bike and stand in front of a sealed gate. A small sign is on top: “Mini Camping Raúl”.

“I think this is closed”, says Moe to me. Can’t be true. If I’m not mistaken, there’s a little light inside. I joggle the gate and shout loud, but just nothing happens. Shit! I don’t want to go anywhere else. It’s far too late for that, and we’re too tired. I open the door from the inside, sneak through the front yard and look carefully through the window into the little room. An old man sits in front of a tiny tv. After recently knocking, I slowly open the door and stand in the middle of the living, dining and bedroom of the man which also has a small kitchenette. It’s absolute tiny. Only when I repeat my greetings, the man’s gaze dissolves from the TV. He jumps up immediately. “Adelante, adelante” (English: Go forward) he calls out loud. He’s quickly talking to me. Now I see his face, it’s full of wrinkles, but it emits a great energy. A dreadlocks hangs on his suntanned head. I don’t even get the chance to tell him that there’s another motorcycle and Moe waiting outside the gate. The man pelts outside, opens the gate, and gesticulates exitedly. When Moe parks the motorcycle in his garden, he firstly asks for our names, finally intruduces himself as Raúl and offers us coffee and tea immediately. I’m confused. This is a campsite, isn’t it?

Without stopping to talk, he shows us his little empire. The well-kept lawn in his garden is ideal for tents, the large camping kitchen is pure luxury. He immediately kindles all the gas plates on the professional gastronomy stove to warm the big room. “You can sleep in here too, it’s cold outside”. Moe and I are looking at each other. We’ve never seen such a great camping kitchen. I tell Raúl that we originally wanted to camp. “As you wish”, he replies. While I get the pot and our food from the bike, he waves Moe to himself. The two disappear in Raúl’s little parlor.

“He wants us to cook in his kitchen” explains Moe, when he comes back. “Seriously?” I don’t know what to think of this guy. He has this huge kitchen for his guests, which he is now blithely heating up. We can’t just put ourselves in the middle of his living room. Besides, I’m too tired for social interaction. I ask Moe to decline the offer politely. “Raúl was a little sad and disappointed”, he tells me afterwards. Now I have a bad conscience. While I’m still thinking about whether the man is too lonely, he already came back. Right after the motto “If you don’t come to me, I have to come to you”, he puts his mate tea right at the table.

But he won’t sit there for long. When he sees our cooking equipment, he jumps up immediately and says we should use his stuff. Though we have everything we need. No chance: Raúl is bringing half of his kitchen stuff over and praises the usefulness of these things for us. All right, the old man runs back and forth, then we cut on his boards, drink his tea and eat with his fork today. Moe and I are now quite amused by the comedy of this situation. It’s a one-man-show, and even though we understand only half – what Raúl doesn’t mind at all – we feel well entertained. When Raúl suddenly comes around the corner with a pile of self-baked bread, we’re totally gobsmacked. And since there’s no point in resisting this, we better take it directly. It’s the most delicious bread we’ve had since the beginning of our journey. We invite Raúl to have dinner with us. Of course he refuses. He’s just too generous to take food from his guests.

With bright eyes, he tells us of people from all over the world who he had as guests, and shows us with great pride the guestbooks he keeps like treasures. Everyone wrote in his own language, that’s what he wants, even if he doesn’t understand. He immediately hits the pages of German and Swiss visitors and shows them to us. I die of laughter when I read about the impressions of the others who experiences the same like us. Between lines like “the toilet is the only place I have my rest” and “we wanted to leave hours ago, but he just doesn’t let us”, there is also a deep sympathy and thankfulness written for this man. Slowly, I’m really glad that we have chosen such a strenuous stage today – otherwise we would never have landed here. Raúl wants to know everything about us, shows us pictures of his family and plays English Whatsapp voice messages of former visitors. Sometimes, he does everything at the same time, so we have to meet big challenge of multitasking sometimes. How much energy does this man have and how sovereign can a 74-year-old actually operate a smartphone?! I’m intrigued. Well-fed and dog-tired, we decide to spend the night in the warm kitchen. I sleep deep and happy. 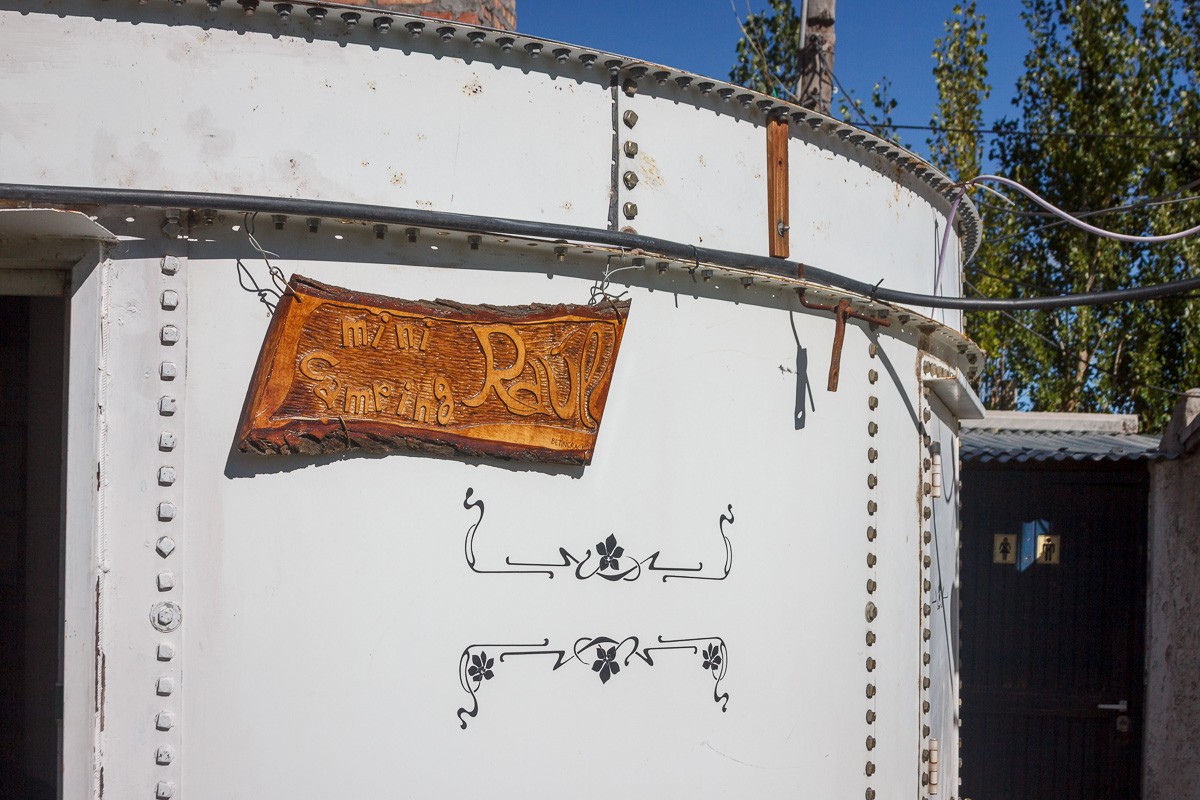 The next morning, we are glad that we had to lock the kitchen on the inside because of the wind: otherwise someone would have been standing early right next to our sleeping-bags. When I’m going to the bike, Raúl is already there. “Coffee, tea, bread?” he knows about all of our wishes before we even knew they were existing. When I’m under the hot shower, I have to think about my mother. Countless times, I had to surrender her urge to help and take care of me (Hi mom! If you read this, I love you btw). Back in the kitchen, the spectacle continues exactly as it stopped yesterday. Raúl likes to repeat his statements and so we hear about 136 times how beautiful our journey or how heavy our motorcycle is.

Time seems to fly and when I say to Raúl that we want to go to Chile today, I see great disappointment in his face. “But you are coming back, right?”, he asks me. I explain to him that this is not possible because we soon get a visit from a friend in Santiago and I feel almost bad about it. I’m starting to write him some nice lines in his guest book while he’s constantly talking to me. Then I try to translate everything. Oh, I haven’t laughed so much for a long time. Finally, we load the motorcycle. Oh, yes, we still have to pay. The fun costs ridiculous 2 euros per person, they have more a symbolic value than anything else. Raúl doesn’t make it for the money, sharing with travelers is his passion. He gives me a big kiss on the cheek, later on the helmet. Adios and all the best for you, Raúl!

Great Pleasures at the Border

In bright sunshine, we ride along a great lake to the Chilean border where an extra portion of fun awaits for us. “Everything off the motorcycle, please.” Uh – beg your pardon?! We’ve already passed the entry to Chile and the food controls twice, but here, they are obviously taking it very seriously. Since compassionate looks do not seem to help, we have to remove all panniers and bags to send them through the scanner. Nothing interesting in it, so everything back on the bike. We can only guess how funny this matter must be with motorcycles where you have to unscrew the panniers completely…

Well, we are now back in Chile, directing to the Carretera Austral. Right after the border, the asphalt road ends. Dark clouds plunge the snow-capped mountains into a dramatic light. We are suddenly in a breathtaking landscape, full of rocky slopes, gorges and the large turquoise resplendent lake right next to us. Now it goes up and down, left and right over steep slopes. Curve after curve we wonder what may come next. Due to the growing rain, the track has turned into a slippery mudne. Deep grooves in the ground are filled with water, it’s like we are riding on a washboard. “Hopefully we get the next curve, hopefully there won’t be a car, hopefully we don’t have to brake” these thoughts are running through my head again and again. The rear wheel slips away not only once, we continously fly over potholes and hit hard on the ground.

Through the damp air, a heavenly sweet fragrance is carried, sometimes so intense that it almost takes my mind away. It smells sweeter than sweet, as sweet as a bath full of Gummibären (a German candy) in that I want to bath in right away. It’s the scent of the real adventure (later, we get told that it was probably wild mint). We’re soaking wet now, but we can’t get enough of this. The continuous vibration unsolves the screw on the handlebars. Hand protection and the handlebar’s end disappear in puddles. So, we have to run back and collect them. How quickly has this peaceful day turned into an apocalyptic mood. Moe and I have the greatest fun, even if, or just because we experience real thrills. We reach the climax of the comedy when the water bubble, filled with two litres, suddenly lands on Moe’s foot while riding a hill up. With great professionalism, Moe balances the thing to the top of the dome where we can stop and pack it away. It slipped out of the pocket on the tank. In joyful anticipation of what is still waiting for us in the South of Chile, we set up our tent behind a quiet corner. The prelude was phenomenal. 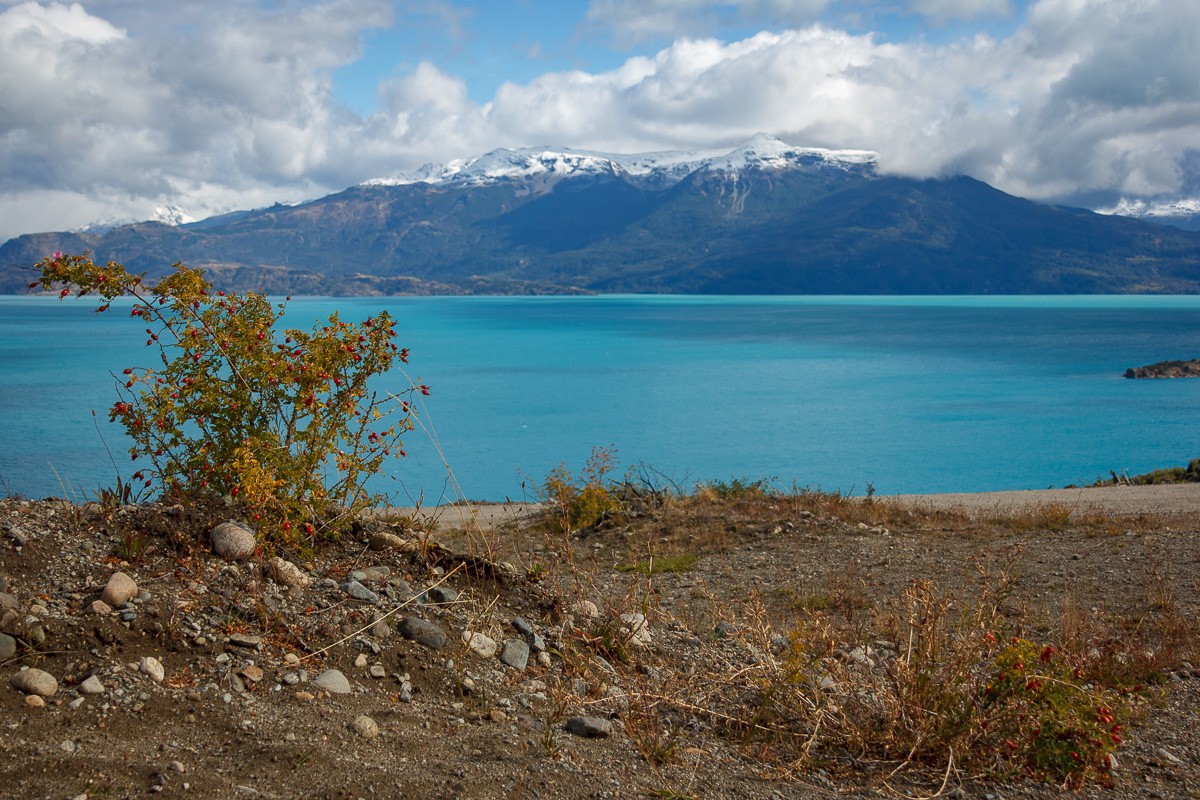 The lake shines again on the next morning 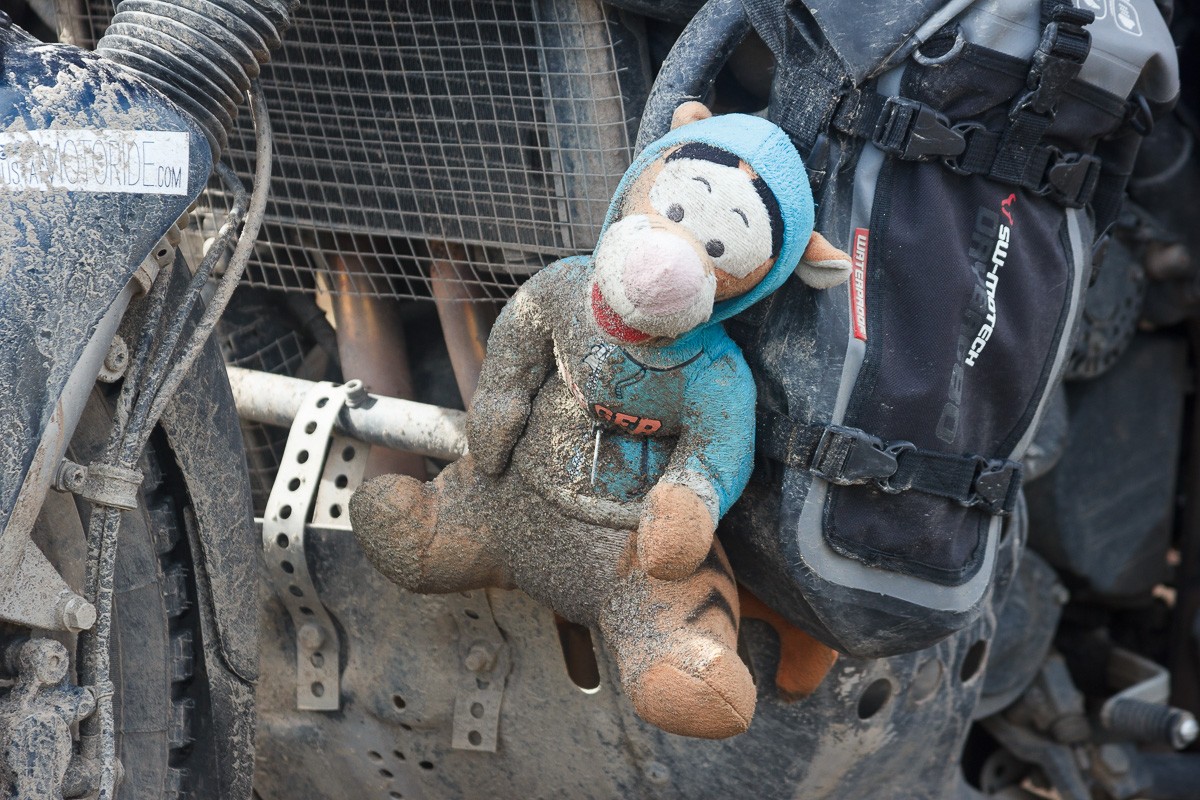 Life can be hard for the tiger… 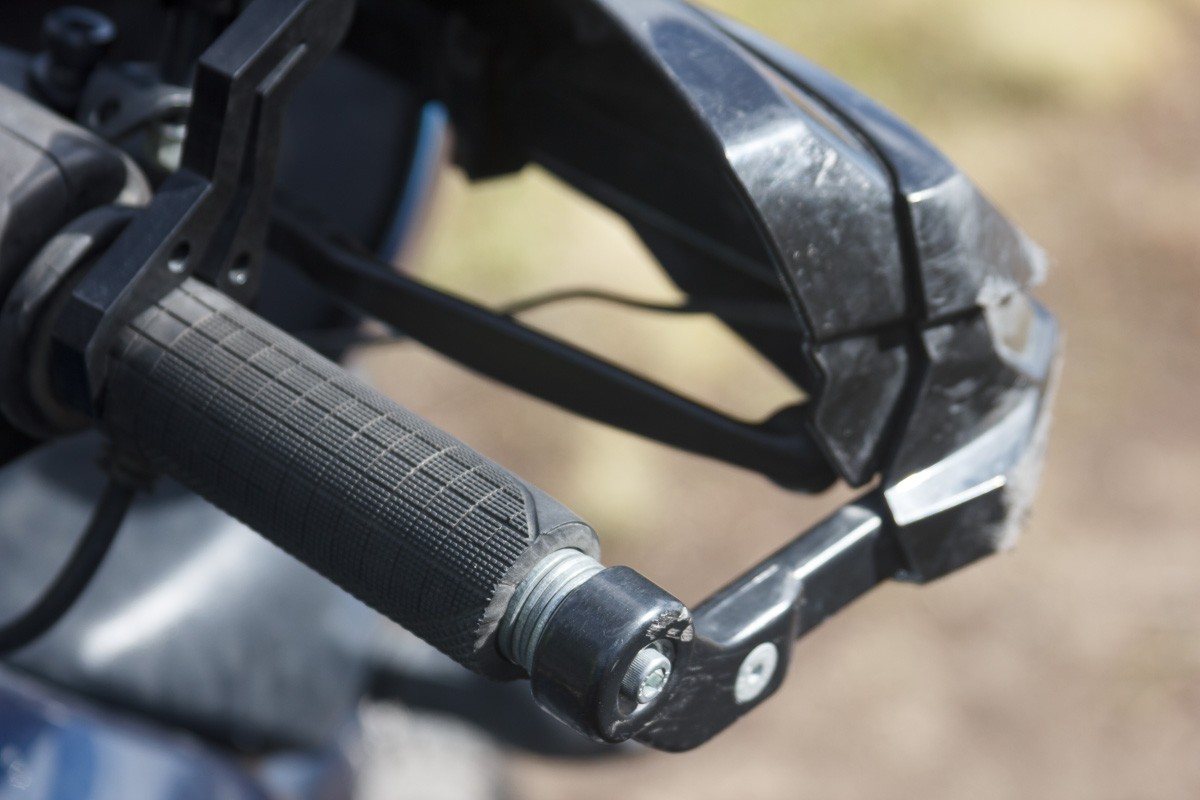 Because we cound not find a central part of the handlebar’s end in the mud, we had to improvise again 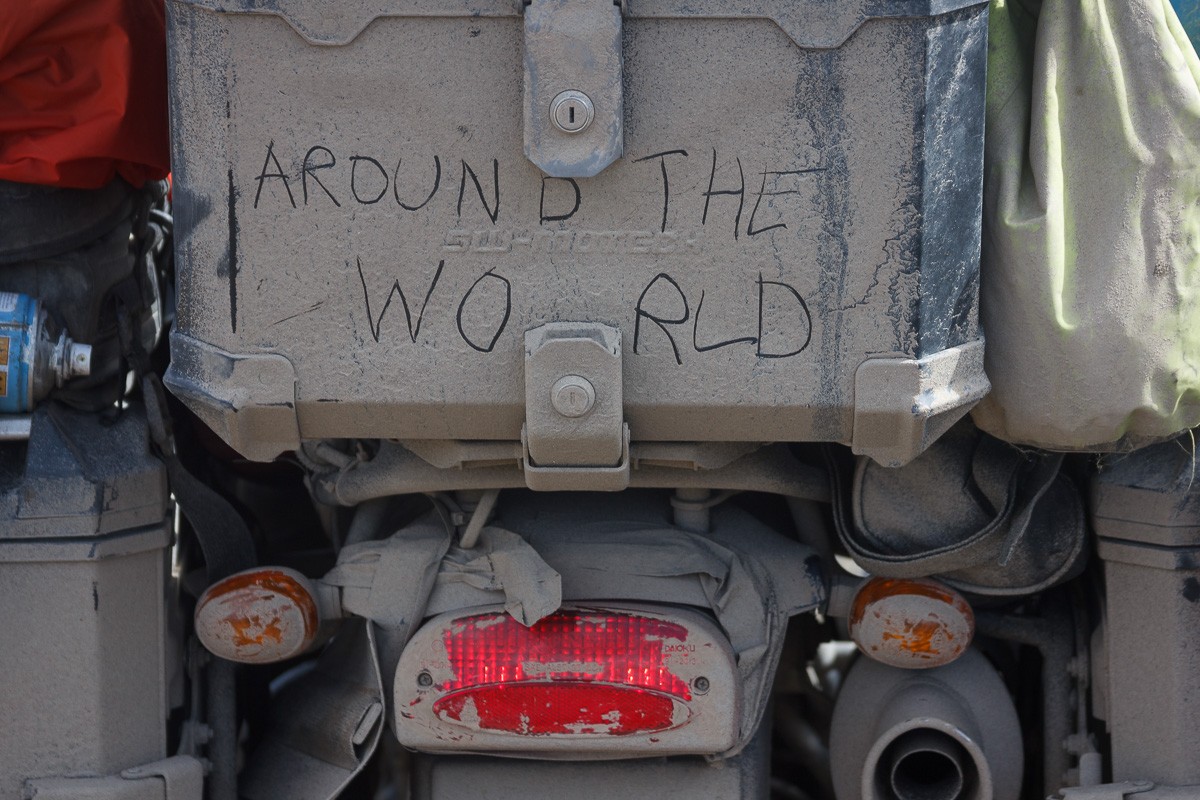 With all that dirt, we can write our mission on the pannier