Sometimes, it’s Good to be Wrong

Our stay in Malargüe has proven once again the fact that you should never make hasty judgements about someone. We decided to stay at the camping of the Argentine small town for a while to recover from the hardships of our hike along the Condor Circuit. Above all, we have to treat ourselves a little bit again, because since we got off the freighter a few months ago, we have lost far too much weight. I lost seven kilos, Moe even twenty-two. Yeah, no mistake here, twenty-two. That’s a proof that our way of traveling has nothing to do with an endless vacation. Sometimes it costs us more energy than we can eat. It was a sunny day on the weekend, when a small family came to the campsite at noon to start a asado (the South American way of barbeque).

Making asado is a true national sport in Argentina. No matter what time of day and no matter what weather – they grill always and everywhere. Usually the whole family is involved in the process that is celebrated several hours. In addition, Argentina is also a real camping nation. Every small town has its own public campsite where you can stay for a little money or have an asado. A culture that we like very much.

So, this little family decides to take over the place right next to us and turns the music on very loudly. This is completely normal in Argentina, too. Such disturbance – as it would probably be called in Germany – does usually not bother the Argentinians. Meanwhile, Moe is sitting near the reception, because there is a weak Wi-Fi. When I approach him, I tell him about the bad news: “Once again, we have a douchebags next to us who impose their bad taste in music to the whole campsite”, I complain. When we return to our place later, the unpleasant neighbors are still there. They’re eating, still with music. “I told you”, I notice while we sit down on the bench. No five minutes later, however, we make very big eyes when our neighbors suddenly bring us a tray full of barbeque treats. And so, we start to have a nice conversation about the stations of our journey, the differences between Argentina and Germany and travel insights with Veronica and Daniel their little daughter Luciana while we are fed with numerous delights. Meanwhile, we are toasting with Fernet-Cola. Finally, Veronca is asking us whether we have seen anything from Malargüe by now. No, we haven’t come to that yet. Veronica looks at me: “Vamos?” (“Let’s go?”) Uh, now? I don’t overthink too long: “Si, vamos!” You shouldn’t miss this opportunity. We are packing things together fastly, and Veronica and Daniel tell us that they want to show us a very special place. “Take your camera”, Daniel calls to us. While I get my jacket out of the tent, Moe is making fun of me because I was talking bad about our neighbors before I got to knew them. Yeah, I guess I judged too fast. However, I am open to conviction. That’s why you’re travelling, right? 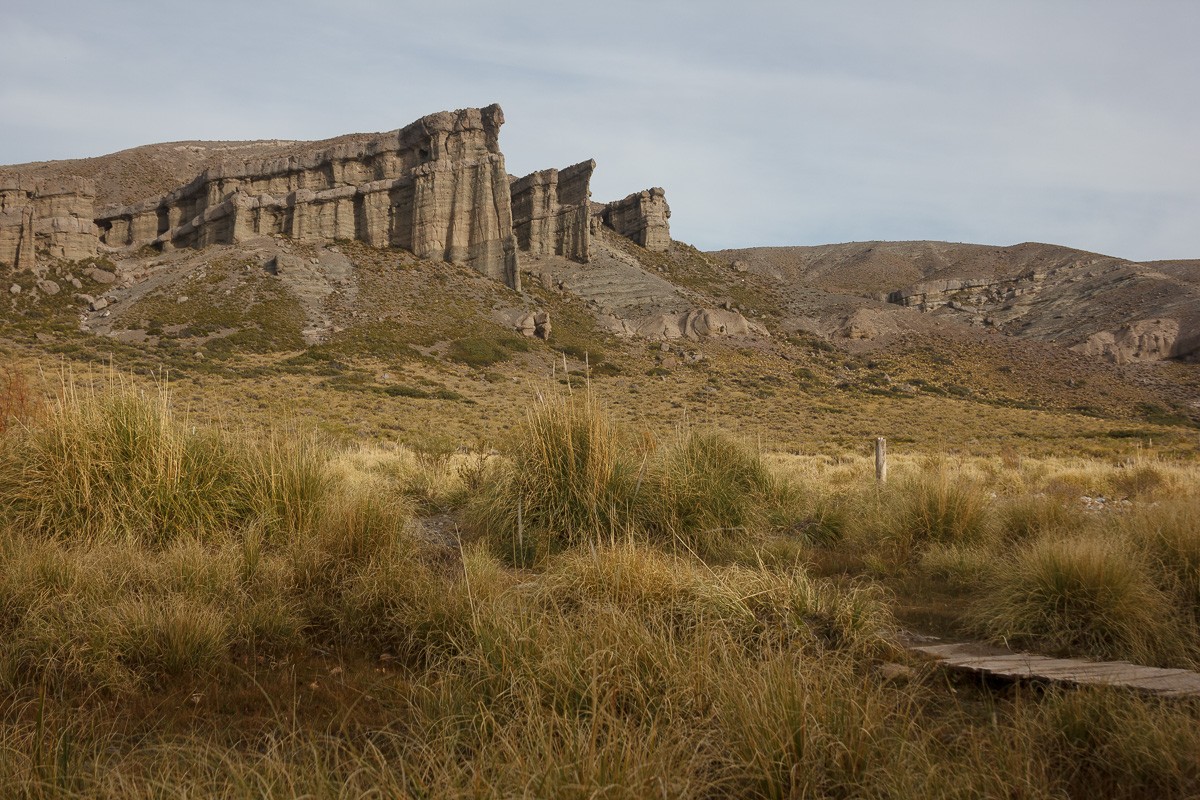 They take us to the Castillos de Pincheira where Chilean bandits used to hide in the caves, as Daniel tells me 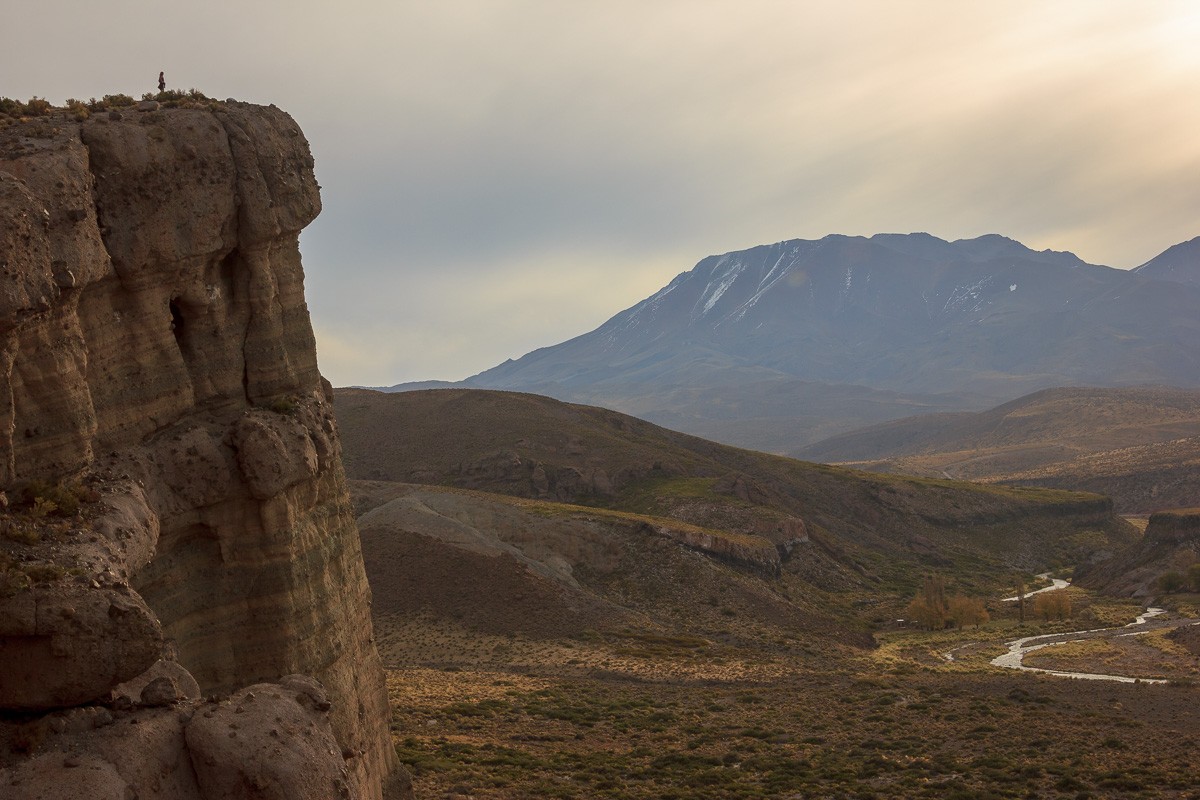 A few days later, on Moe’s birthday, we’re still in Malargüe, and make a day trip to the nearby Valle Hermoso. It’s nice to ride with a little less luggage. 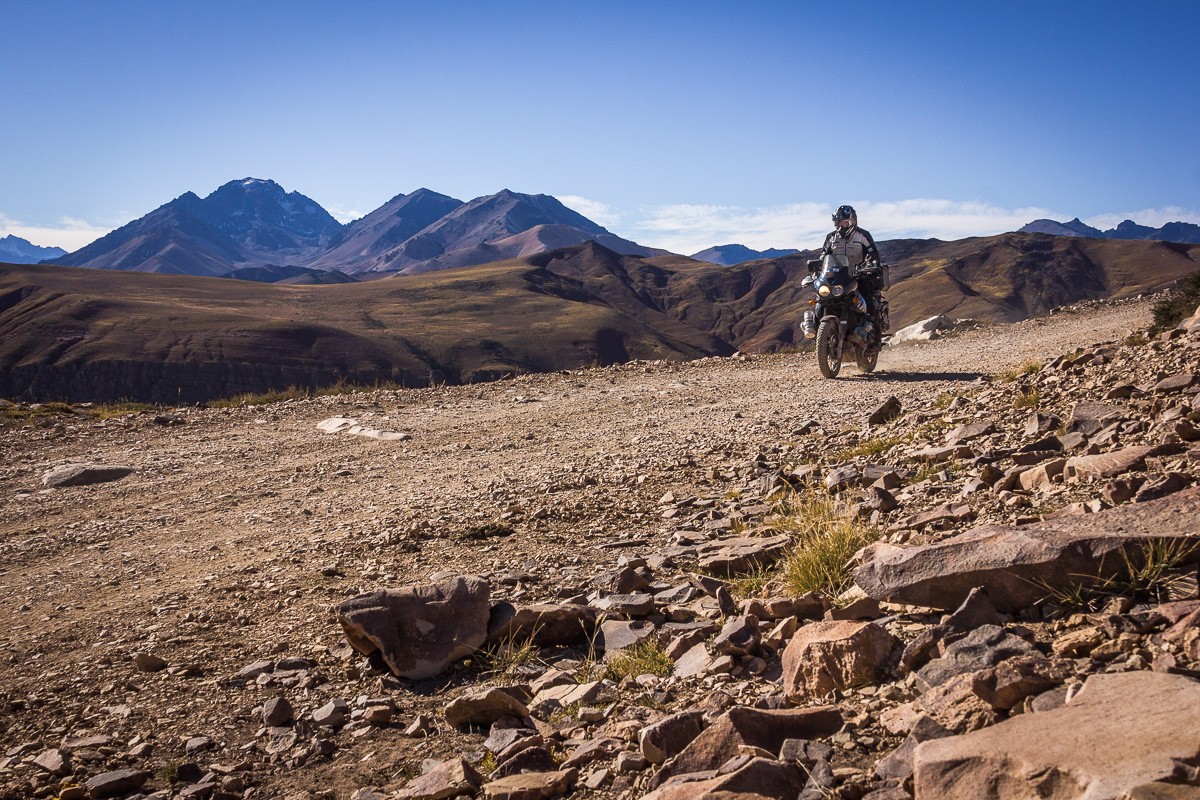 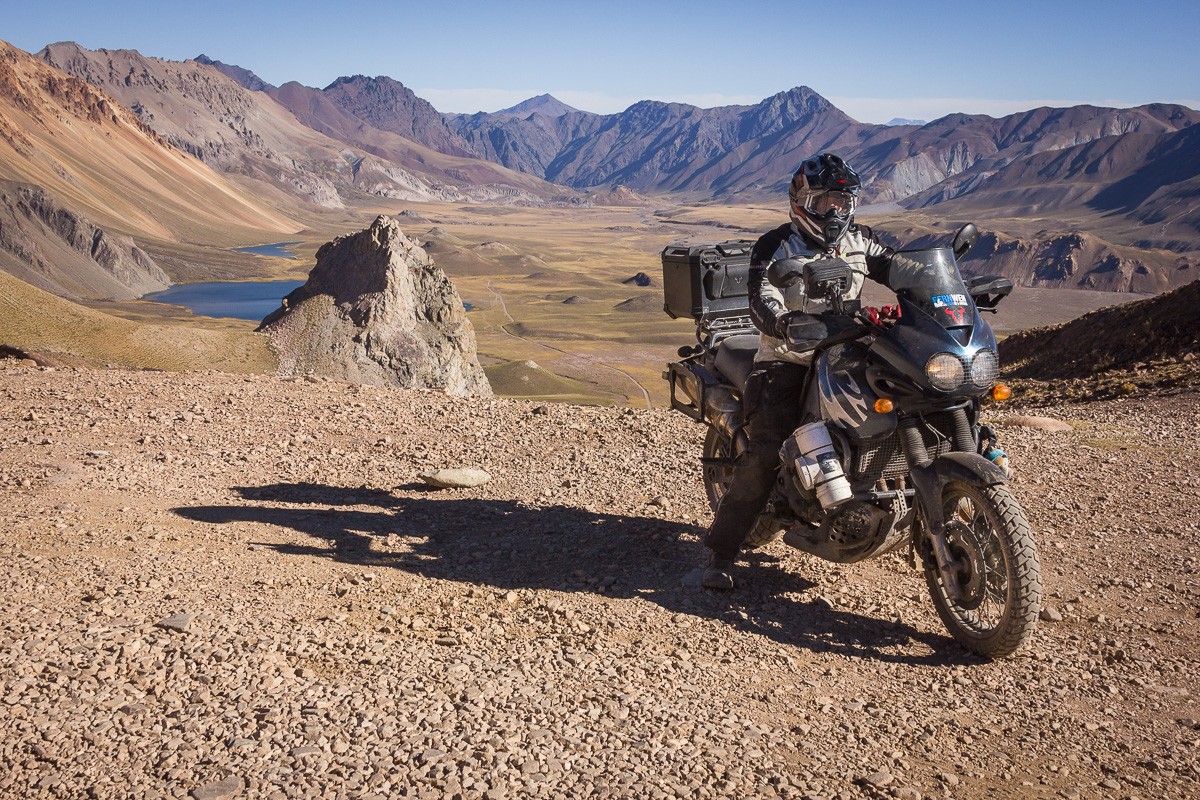 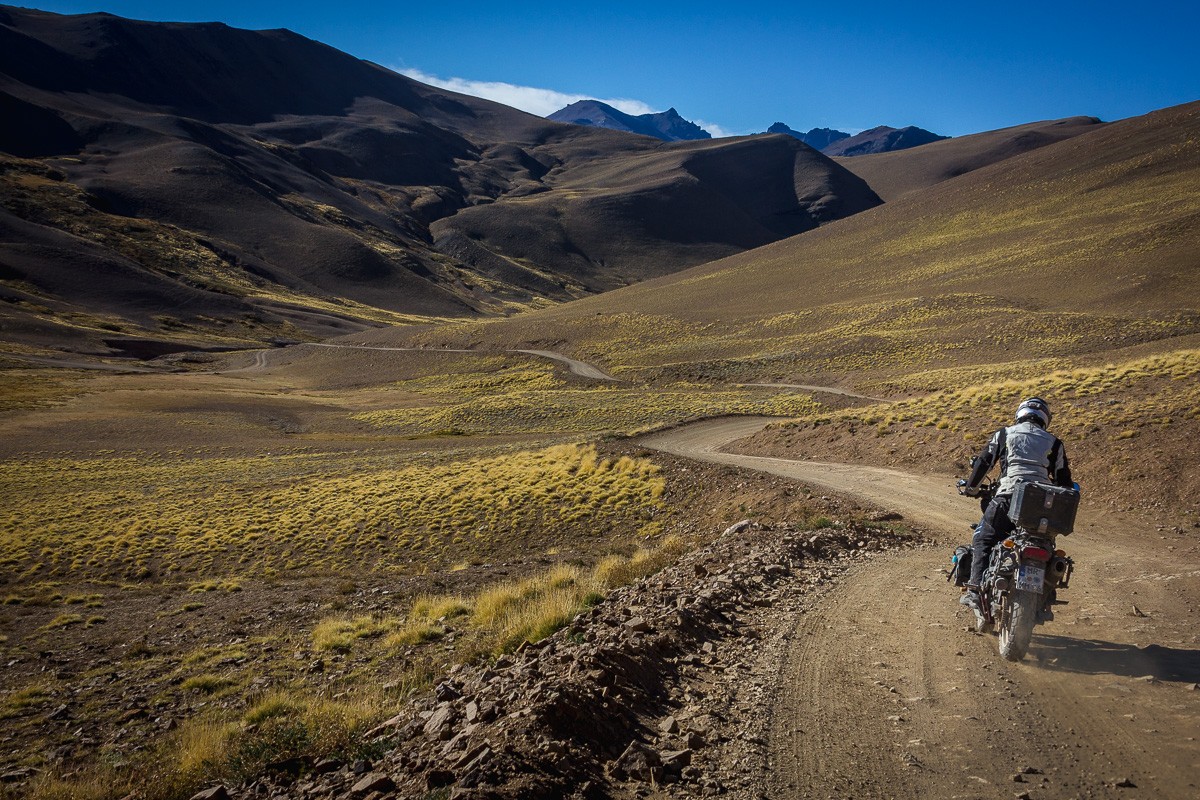 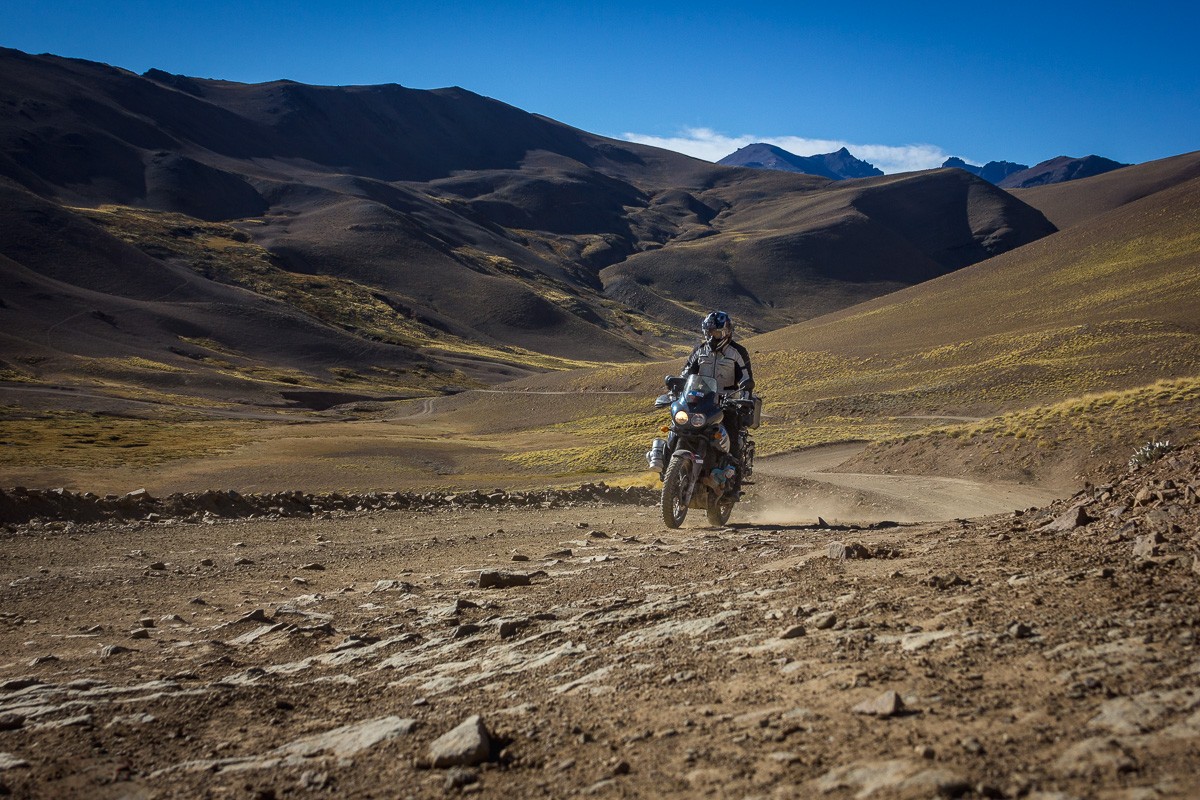 After that, it’s time to go to Santiago de Chile. Jendrik from Marburg is coming to visit us soon, and there are still a few things to organize in the capital of Chile. We are staying at an observatory that is located outside the city in the mountains. First, we bring the Tiger to the workshop, so that some of the bungle of the last few months can be repaired. Besides, it’s time to change the old chain and a sprocket. We spend a few days looking for the necessary spare parts in Santiago, to decide finally for the import of the chain kit from the Triumph-dealer. It’s supposed to arrive in between 30 and 45 days. Since Jendrik is going to visit us anyway, and the bike would be standing still anyways, it’s not a problem. 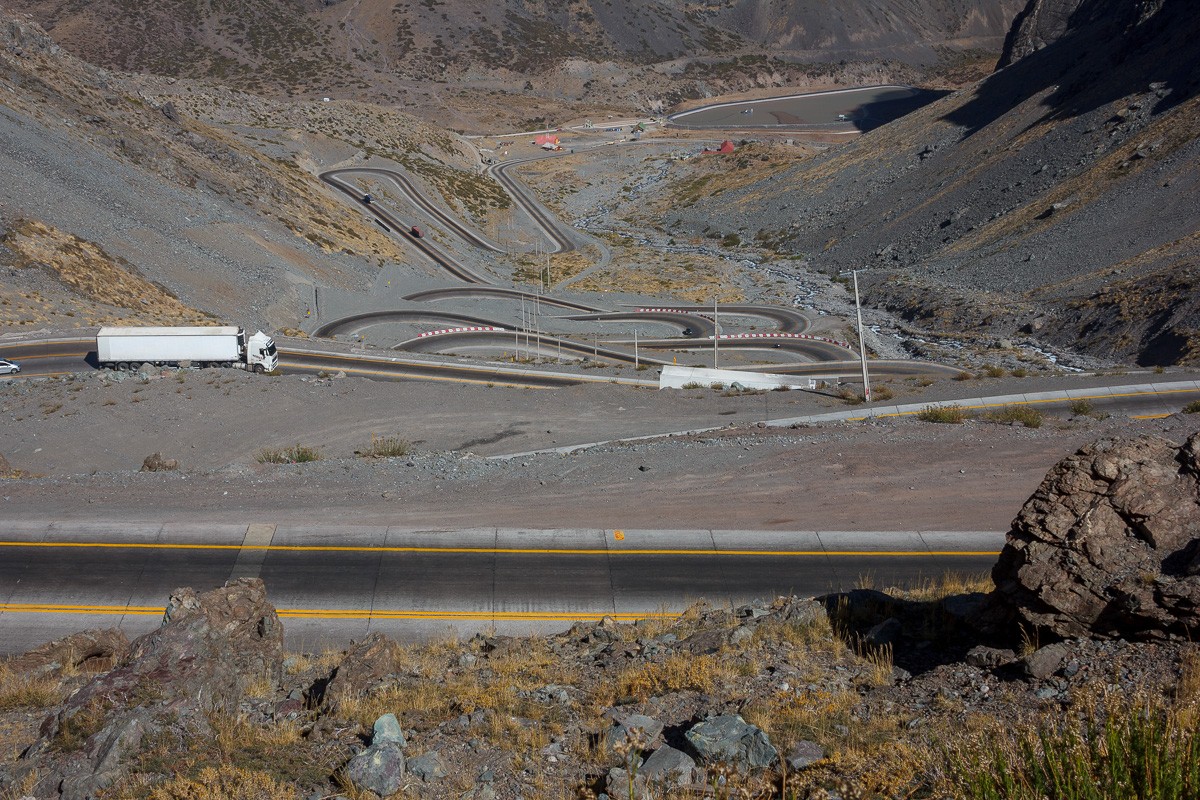 The pass streets are alsways a highlight. If only there were less trucks here… 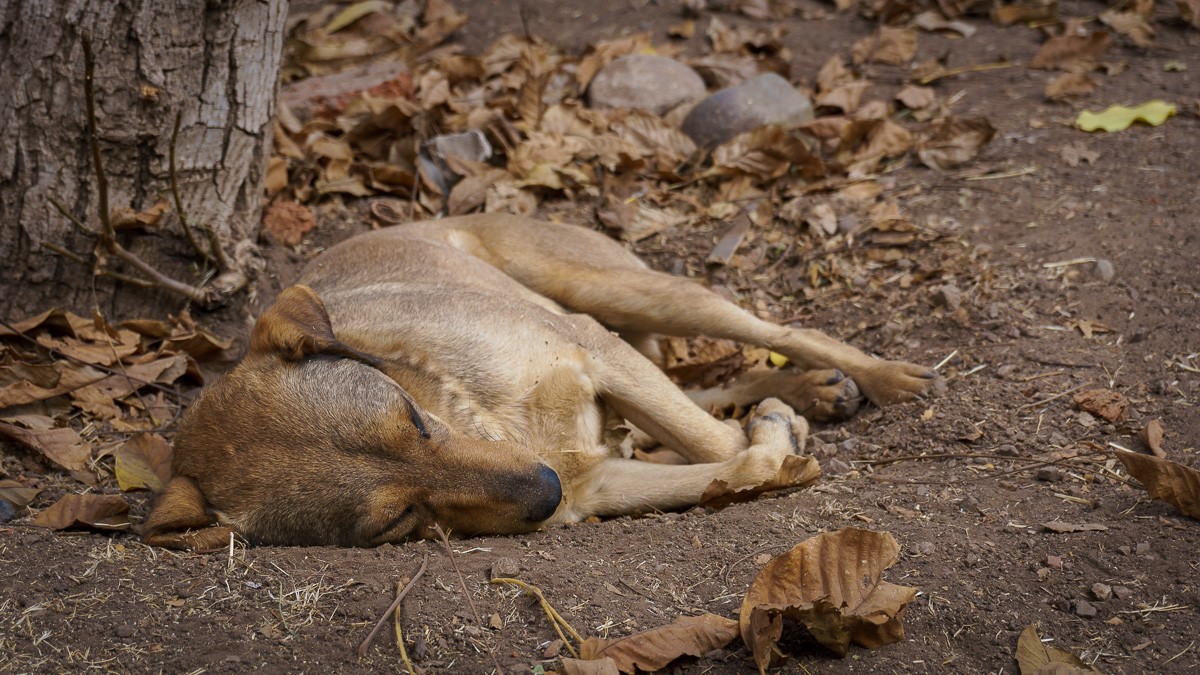 But a few days later, everything turns out different than planned: Jendrik is stuck at the airport in Madrid because (not only) his luggage got lost on the way from Frankfurt to Madrid. The airline won’t let him continue his trip to Santiago as they don’t send luggage to this airport afterwards. At least, they pay for a hotel room, but do not give him any information on the arrival of his luggage, which also includes some important spare parts from Germany for us. Instead, they put him off from day to day. When he is offered a free flight back to Frankfurt after four days, he takes it as he is now worried about the loss of baggage. We can understand this too well, but of course, it is also terribly sad that we will have to wait for some time until he visits us and us three can explore the Andes. Finally, Jendrik sends the package with the spare parts from Germany to Chile. So, we have a little waiting time that we best bridge with travelling. Touring through Chile without a motorcycle is an exciting experience, too. 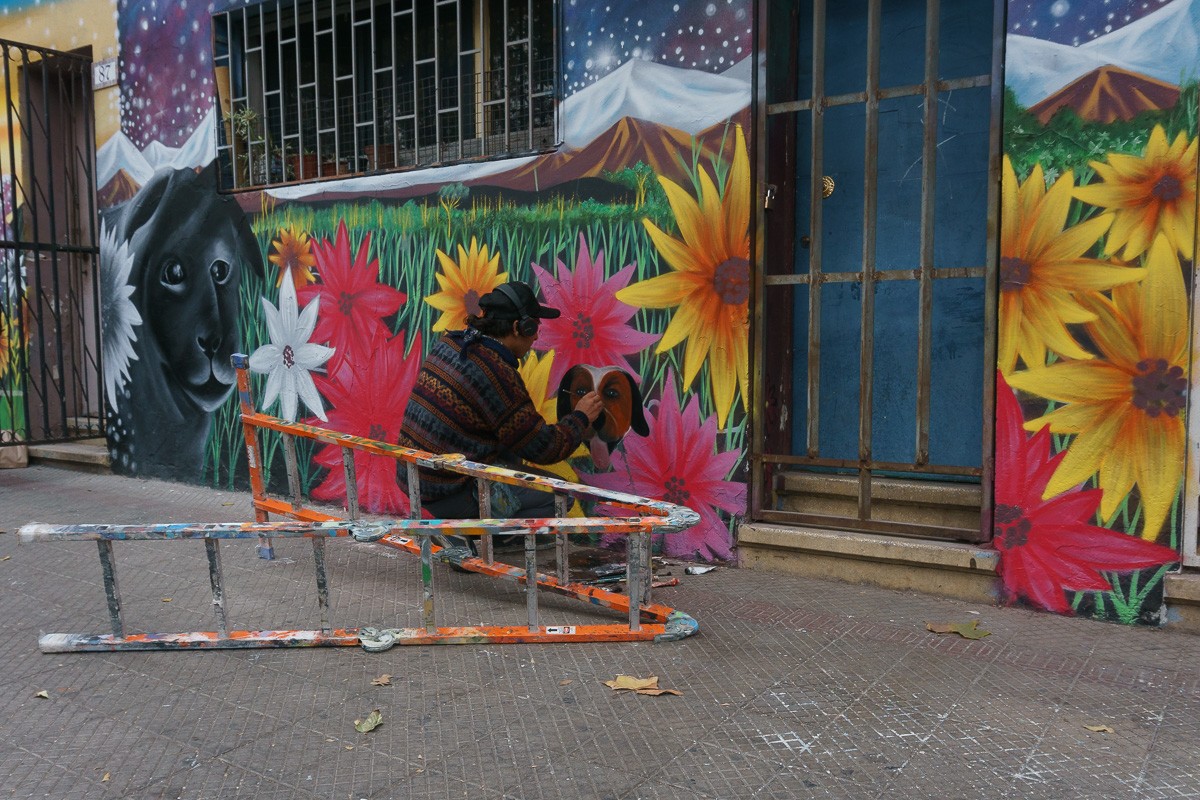 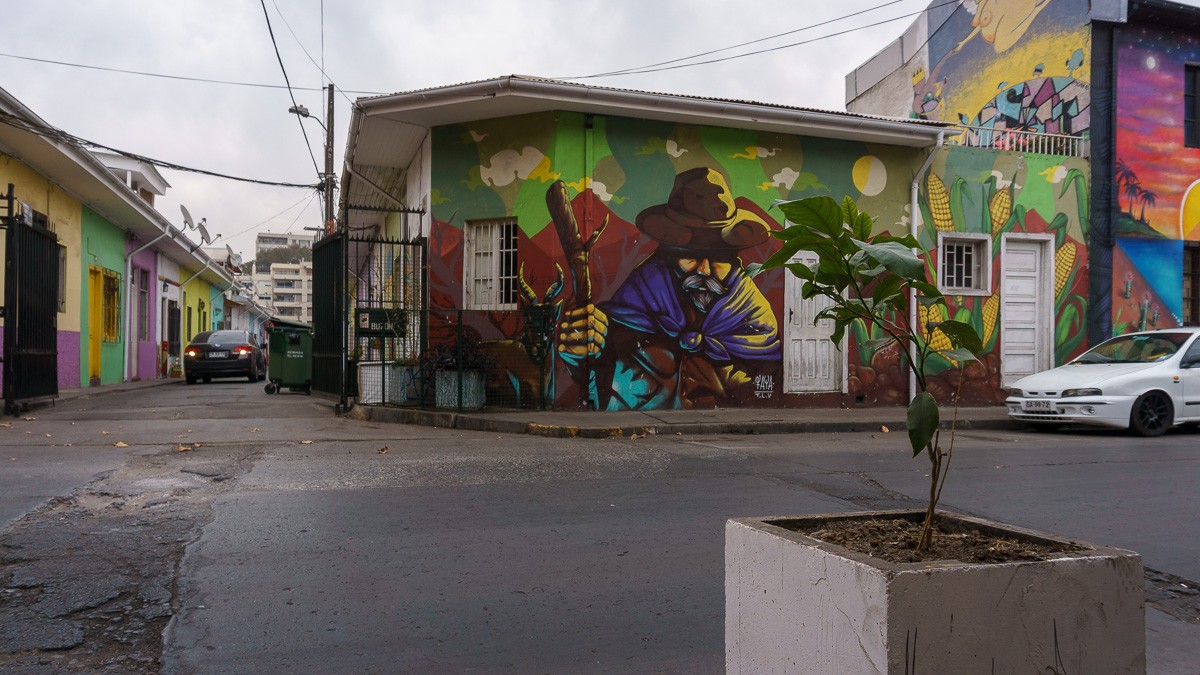 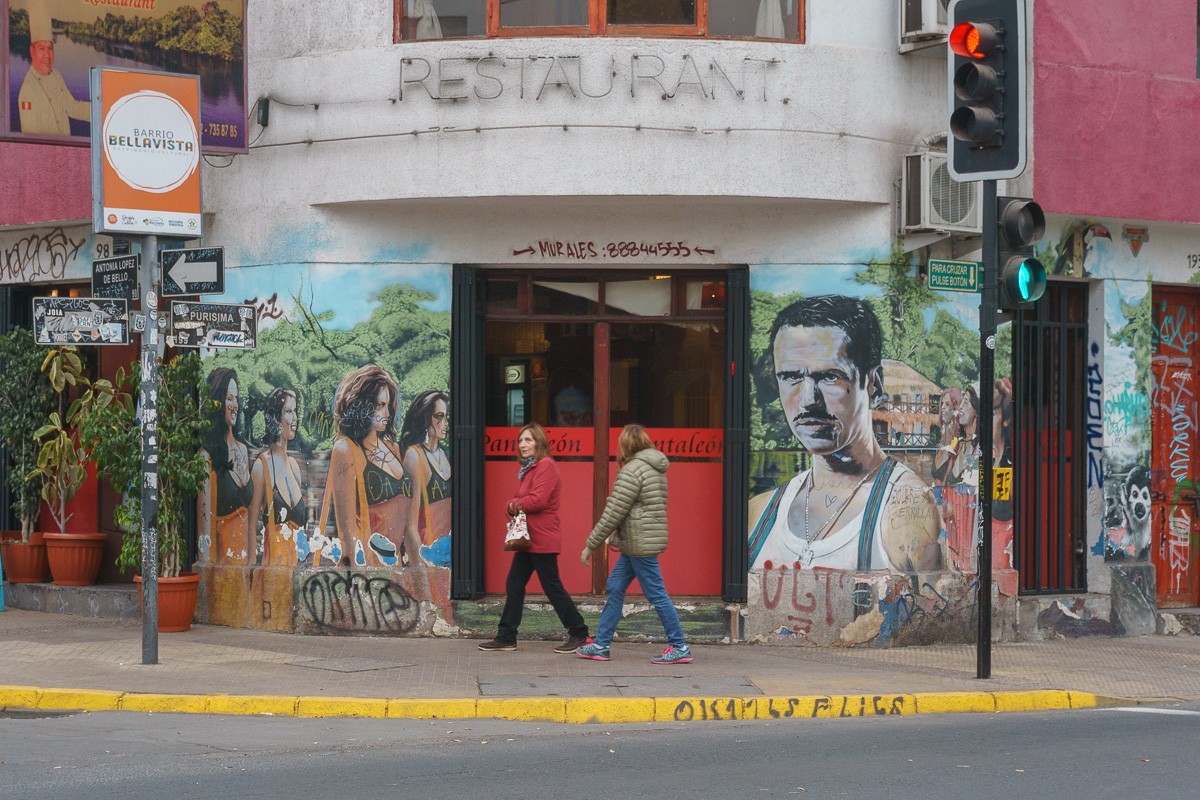 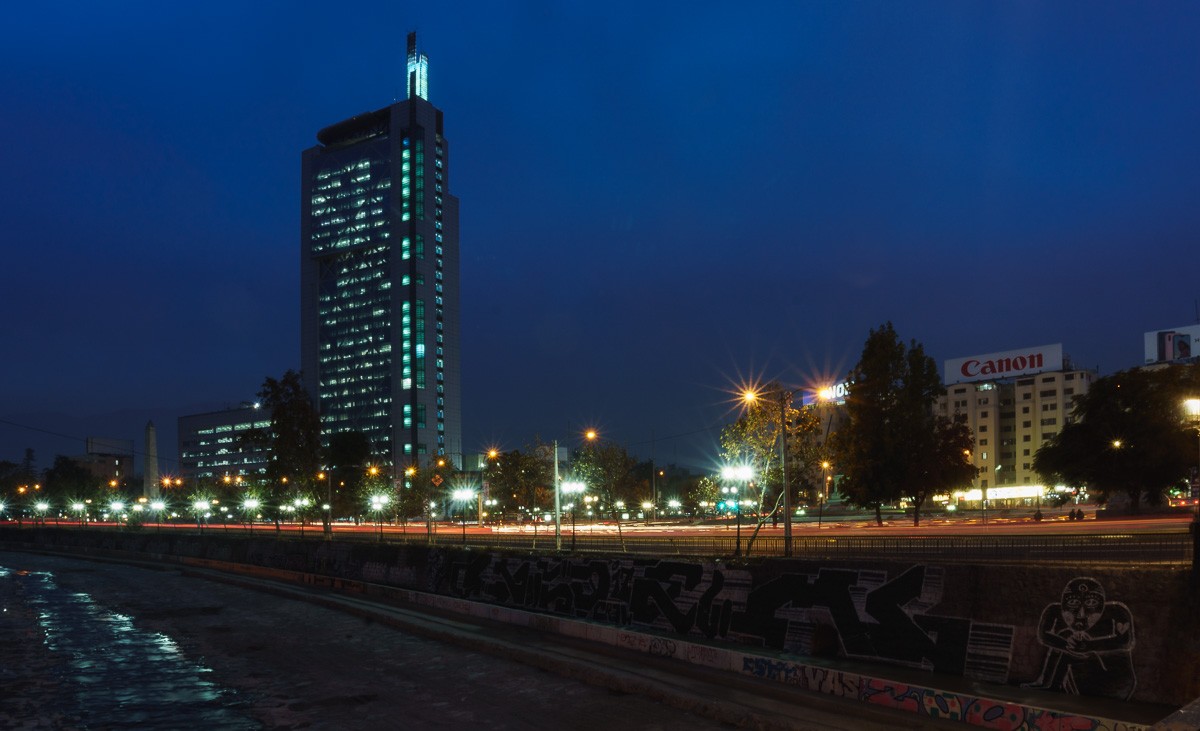