you must be strong now. The reason: Our external hard disk drive broke down. Therefore, the spectacular pictures of mud fights have been lost. But you have to see it as an opportunity. The opportunity to train your imagination and fight against the claim that goldfish have a greater attention span than we do today.

So let’s get going…

Alex from Germany is still visiting us and we want to ride motorcycles together after our visit at Machu Picchu. Since there is no reasonable motorcycle rental in Lima, Moe and I ride with the Tiger to Huanuco to meet up with Alex two days later. In the middle of the mountains.

On the first day, it’s still fun, as the empty street sends us again and again over nice gravel sections and short river crossings. So far, so good.

Dream scenery on some altitude

So, Alex joins a night bus while we start the second day. The asphalt is completely gone by now and we have to conquer muddy tracks where we can only make very slow progress. The following “detours” over mud fields, broken road parts, the continuous fog and the merciless cold really take a toll on us. We also see what happens if you don’t pay attention here: A bus crashed down the slope. No rarity in Peru. However, turning around is not an option, as we came this far that we do not want to take this way a second time.

…and the road is gone

Just 90 kilometres before Huánuco the road is closed. “You have to go back, you can’t go any further here,” a man in a warning vest shouts at us. “Can’t we get through here on a motorcycle?” “No.” We want to check ourselves and ride past the barrier. Until there is a scene that leaves us speechless. Due to a landslide, the entire road is gone. Since it was on a steep slope, an alternative way is impossible. We contact Alex, who is already wondering where we are. Will we make it to him today? Probably not.

We ride to the gas station, where a very friendly Venezuelan recommends a different route to us. It leads far up again over a pass, but we don’t have to go back all the way back. We hope that we will make it to Huanuco – although it’s late. And even if we are already completely at the end of our strength.

What are we doing here?

But – as always – it comes differently than planned. The center stand comes off a short time later and we screw at the roadside until it gradually gets dark. At over 4400 meters it gets very cold very quickly. But we still have to go to the next bigger city Cerro de Pasco, because camping at this altitude is not an option. But until then it is still 80 kilometres and although I already sit jittering on the motorcycle, it finally starts to rain. I count every damn mile.

In Cerro de Pasco the drama is not over yet. For hours (!) we search for an accommodation with parking space for the Tiger. We ask everyone but always only get wrong or no information. Moe and I are so exhausted that we finally start bickering. To leave the Tiger in this wrecked city alone on the street at night – no good idea at all! Isn’t there finally salvation for us?

After the desperate search we find a typical sex motel at the end of the town. As so many times before, we have no choice, no, we are just happy to have found a safe place for the Tiger. At eleven o’clock we lie finally in the bed, in a supercold room. The luxury of heaters does not usually exist here.

Rarely, I felt so weak. I have never frozen that much. I start crying, for pain and for relief. “What are we actually doing here?” I ask Moe. For another two hours I lie trembling in bed and doubt. Everything.

On the next day, the world already appears a bit better. We reach Huanuco and are invited by the mechanic of the motorcycle rental for lunch. Alex has already become a part of the family and was allowed to spend the night in the living room between some motorcycles.

For the next days, Alex rents a light Honda with 300 ccm. Also Moe and I want to ride a little lighter for one day and rent two small Chinese bikes, which are very common in South America. We ride over a thousand meters high – and I get a panic attack. So far I’ve only ridden really off-road once and for the second time, well, let’s say I would have liked something more beginner-friendly. It takes a bit of persuasion until I finally decide to give it a try. The narrow serpentines, the steep ascent and the loose scree really make me sweat, so that I am far away from my comfort zone. But Alex and Moe wait for me.

The next day, we head North. The ride through the mountains is once again madness. Endless hairpin bends lead us up and down again. So it is completely normal to sweat to death down in the valley, to get into stormy gusts further up and later even to have snowfall at 4300 meters, all within a day. What looks like a normal line on the map could hardly hold more surprises in store.

The rain is our faithful companion and as beautiful as the mountains are: it is and remains simply uncomfortable and exhausting. 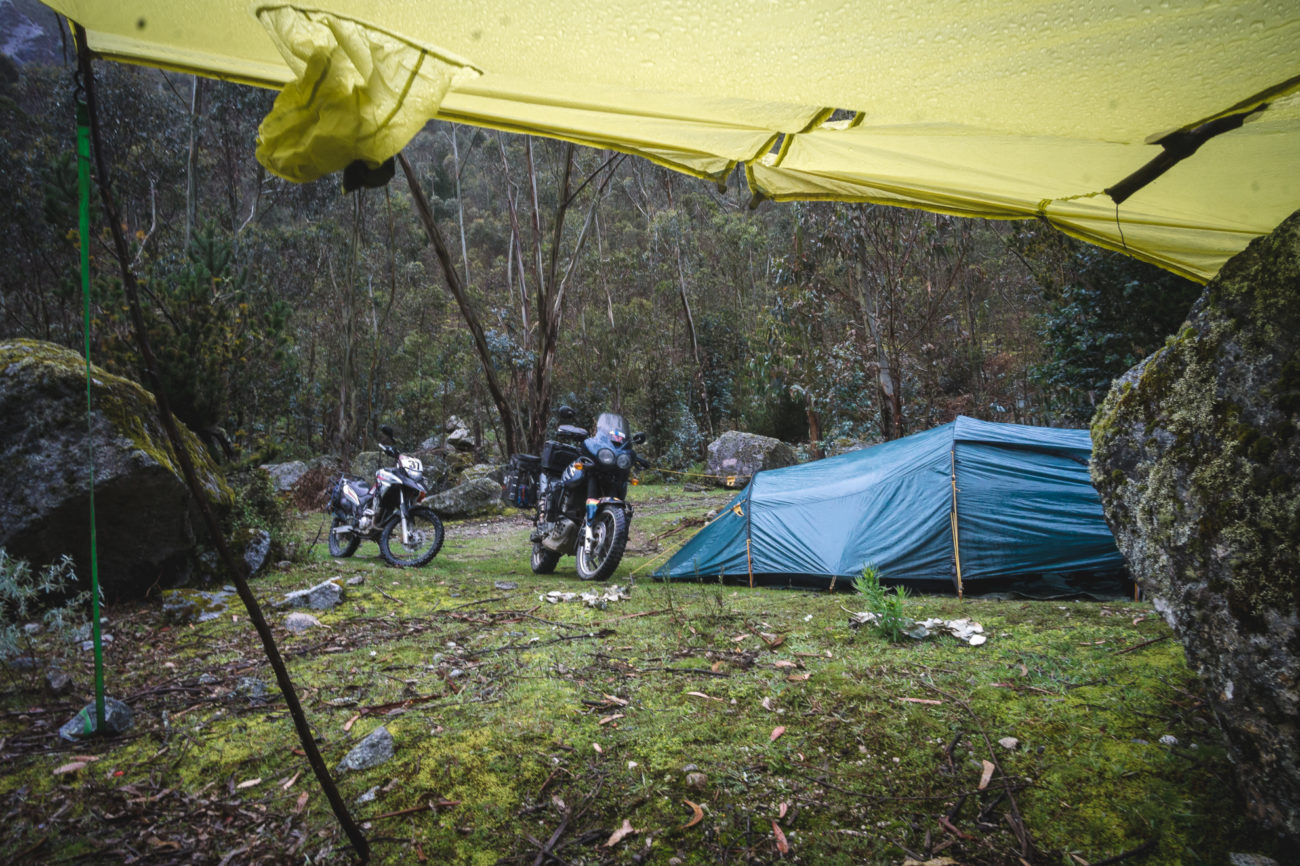 But with an empty stomach sleeping is not easy. Moe builds a raincover 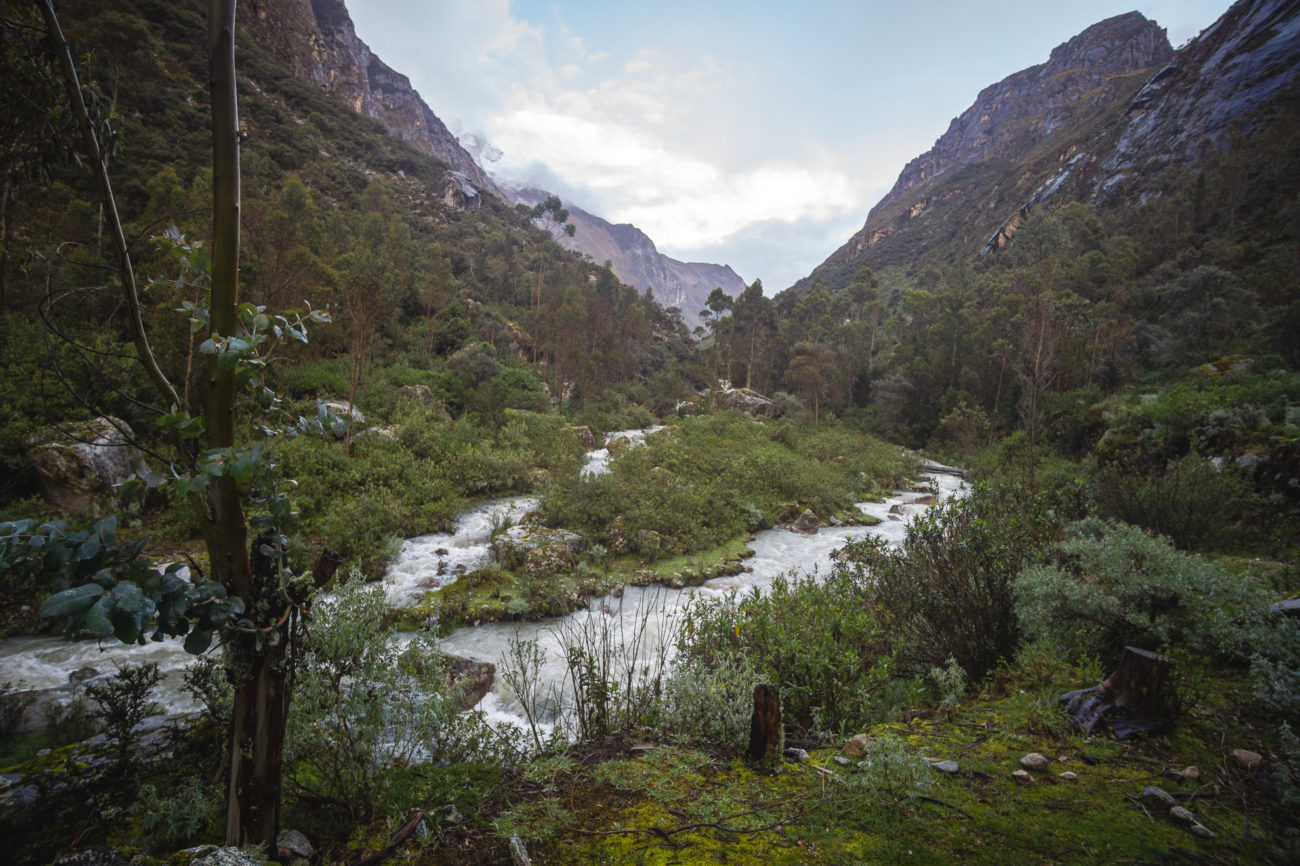 How nice would it be here with sunshine?

So we change the route and ride to the coast, where the roads are boring as hell, but the weather is wonderfully warm and dry. Here we also meet Michael, whose Honda Transalp immediately catches our eye. And no other Austrian is sure as original as Michael. There are people who regularly complain about the amount of our luggage, but Michael brings it to a whole new level. In his luggage system he easily stores twenty litres of water, some litres of motor oil, a parasol and also two long wooden boards as a parking aid. But our highlight remains a long stick – stored in a bucket at the front, ready to hand – so he can scare away dogs and beat against trucks that come too close to him. What a casual guy!

We meet us to tell each other stories, and later we learn that Michael is 57 years old (which he doesn’t look like at all). Once again the proof: Travelling keeps you young!

“There must be a good place to sleep back there”

Enough rest. Now we slowly go back to the mountains, back to the beautiful Cordillera Blanca, where we find a kiosk in the small village Yungay. Here some Peruvians sit together with beer and Pisco, the atmosphere is exuberant and in the TV there are some quite entertaining videos of the regional mountain music. Let’s go in there!

It doesn’t take long until we drink together. Moe tells the people that today is my birthday and so I have to dance with Marco, seventy years old, to the local music with a handkerchief in my right hand (that’s the way they do it here). Alex gets called “El Especial” because he doesn’t drink alcohol today (that’s not the way they do it here). Marco spontaneously invites us for breakfast the next morning.

Of course we accept this offer and enjoy together the fresh avocados from his tree, have a nice chat and admire his beautiful garden. He gives us plenty of fruit for the way. In May there is a big folk festival. “Don’t you want to come over?” We promise to come back. One should never refuse invitations on journeys…

The Huascaran National Park enchants us with its beautiful mountains 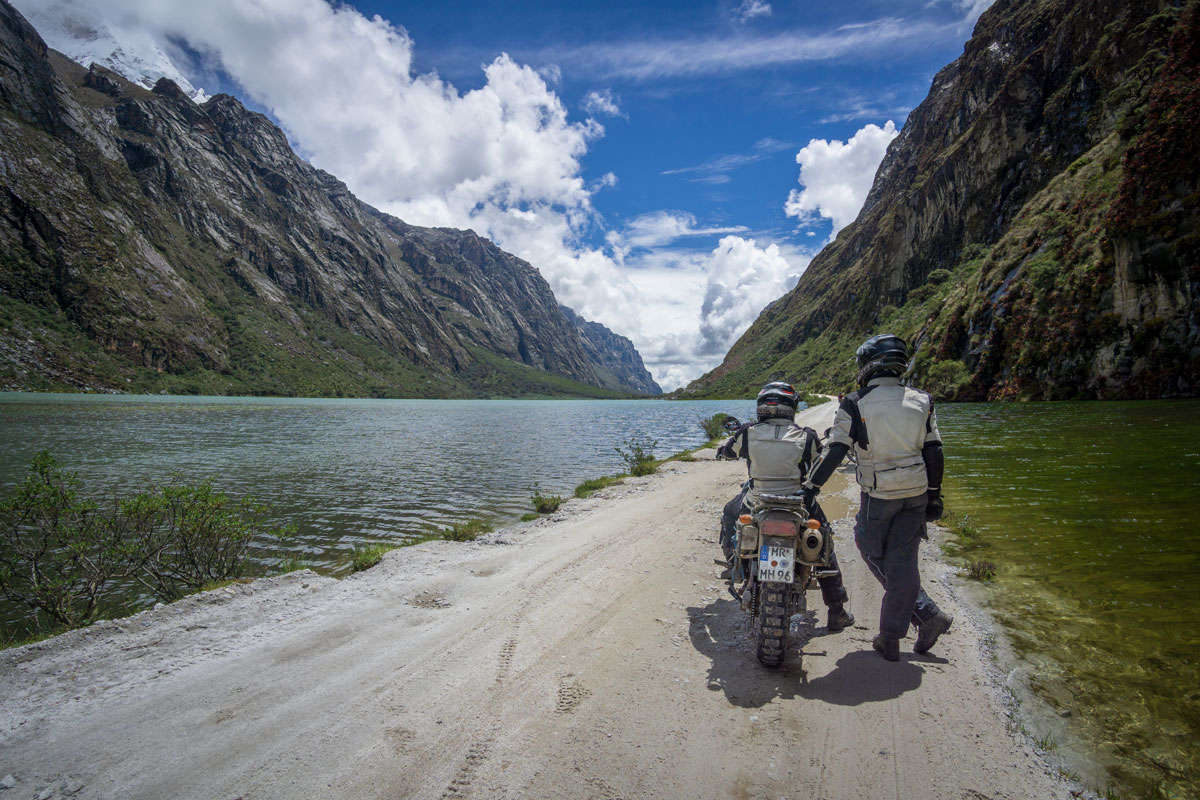 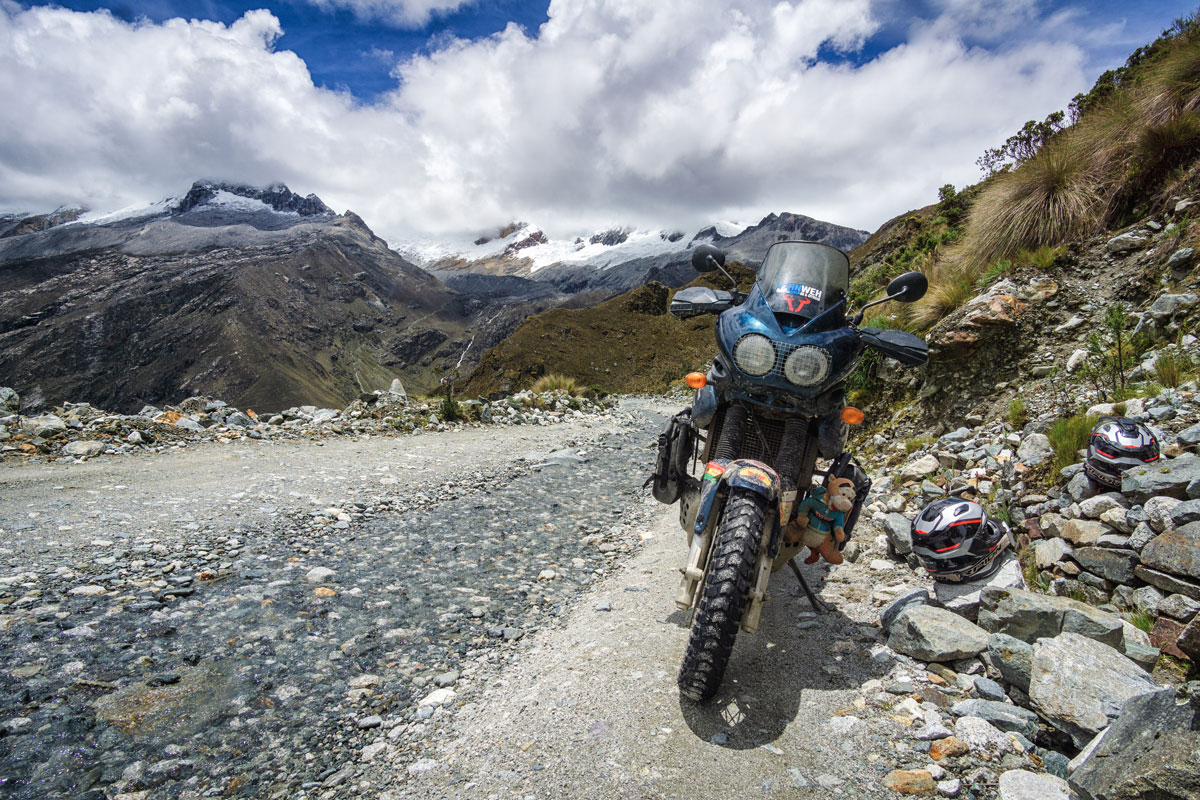 We start our way back to Huanuco. Once again we fight with the cold, the altitude and the rain. Alex suffers particularly because he only rides in thin trousers and without heating grips (which are definitely one of the best inventions for motorcyclists!).

It happens again: The road just broke away in front of us. A quite frightening sight. However, some Peruvians stand at the place and wave us cheerfully in the direction of a narrow path. “No problem with the motorcycles.”

I check the beginnung of the path, whereby a pick-up comes drives towards me. “It won’t be easy”, I shout to them. “But it’s feasible.”

We ride off and the path continues to turn into a demanding hiking trail. But some Peruvians, who transport some goods by foot on this way, offer their help. Many men now support the Tiger, which is slowly pushed, and held at the ugliest parts. What a feat of strength! I look at the further course and get a slight shock: The next part is almost impossible! The pick-up can’t possibly have gone up here as narrow as it is.

Now there is however no back and thus we carry the Tiger with the largest caution the following stone steps down. While I am start being mad at me to have trusted the optimistic Peruvians, another one brings the bad news: “Behind the hill here it gets even worse”.

Meanwhile the Peruvians are asking for money for their noble service. I wonder if we were sent here for this purpose in the first place.

Next is a steep, absolutely muddy slope that goes straight down. In retrospect I don’t know how, but with the combined strength of seven people, we bring the Tiger down there safely. The following river crossing is comparatively child’s play.

But all this is not enough: At the gas station of the next small village we get astonished looks. “How did you get here with your motorcycles,” asks the gas station attendant. I tell him about the muddy action, but I only get a questioning look. “Why did you do that when the road just behind this village is also gone?

It’s hard to describe with words how much my heart slipped into my pants at that moment. Anyway, I lost faith in humanity for a short moment.

Nevertheless, we set off and want to have a look at the place the next morning. The alternative footpath leads already at the beginning so steeply up the hill that it is absolutely impossible for us with the Tiger. “It takes at least two weeks until a detour is built.” But Alex has to return the motorcycle and get his flight back home. There is no other way. So Moe and Alex, again with the help of spectators, carry the small motorbike over the way. A demanding action which results in being called the loco gringos. Wise guys even say to us: “You can do that with the big motorcycle, too”. Yes, sure…

Meanwhile I look after the tiger and open our passports. Will we make it out of Peru in time if we are caught here for so long now? I wonder if there is not somewhere a route with which we can get out of this village. And indeed: There is a way that is not marked on our map. So after we have to say goodbye to Alex under completely different circumstances than we ever expected, we start again into the unknown. But this unexpected stretch turns out to be a dream road that leads us along the most beautiful mountains, the Cordillera Huayhuash. So the evil spook still has a good end. 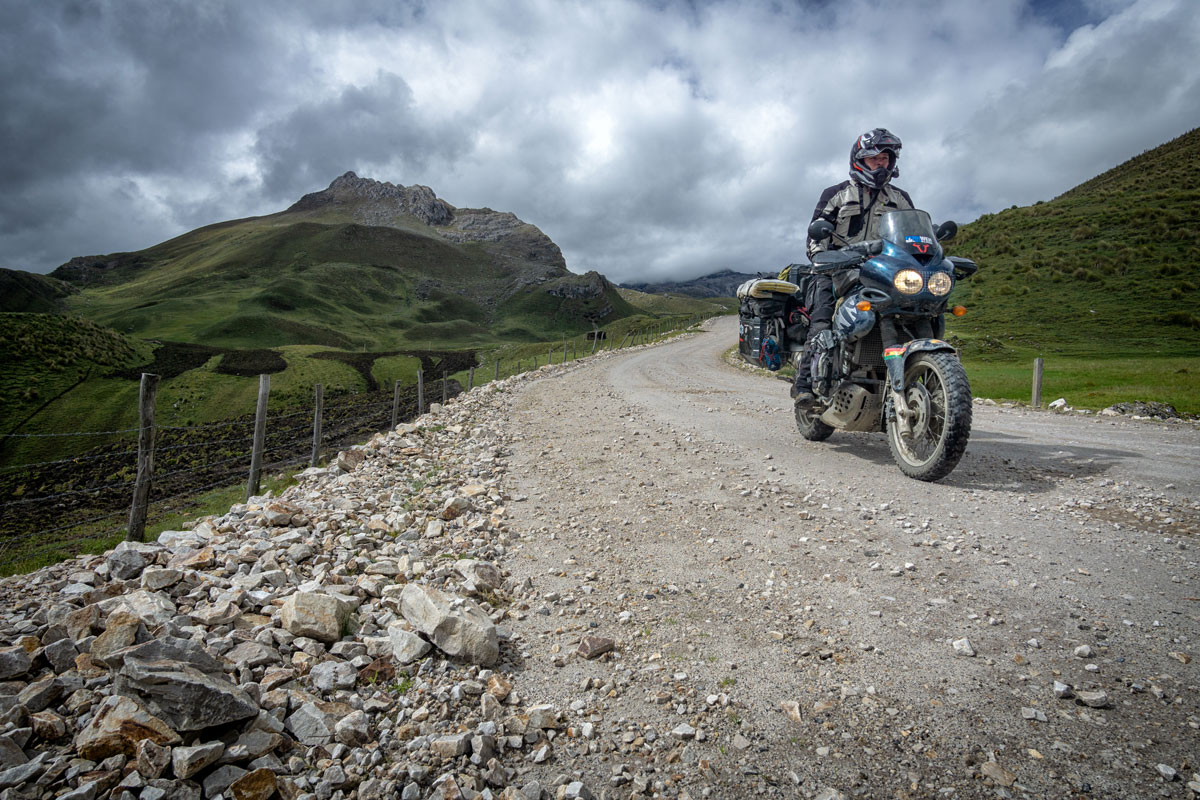