In the morning, we pack our things, say goodbye to Matthias, his family and the Swiss, and start way to Argentina. Only the Rio Uruguay is still in the way. This border separates the two countries. There are three possible ways for us to cross it: a ferry from Montevideo to Buenes Aires, a ferry from Colonia, or a bridge in Fray Bentos. Since the ferries are very expensive for our means, we gladly take the detour via Frey Bentos. We’re riding for an eternity on straight streets to the north. It’s good that we can take turns. For Nicki, it is a very new experience to ride with luggage and a pillion, but I’ve always felt safe in the back and also got to know a completely new perspective (Nicki: I have great respect for Moe that he is able to ride the Tiger through rough terrain. For now, I’m only riding on asphalt to get used to the weight. It is something completely different to ride with such a heavy motorcycle and costs a lot of strength!).

A Difficult Start in Argentina

When we reach the Argentine border, everything goes very easy. The passports are stamped and our Uruguayan import documents for the tiger are replaced by Argentinan.

It’ll be exciting behind the border. The area is known for its corrupt police among travelers. In particular, on the famous ruta catorce, the sheriffs are commited to rip off foreigners. We don’t want to support this and try to bypass the police checkpoints via side roads.

On the map, we choose a way that leads us to a section of ruta catorce below the checkpoint. It looks like we could bypass the critical spot. To get there, we have to ride through the fields. The offroad tracks here are a bit more demanding than those in Uruguay and it’s fun to ride through the terrain. I am able to prevent the bike from falling few times. Finally, we reach the ruta cartorce. Contrary to our expectation, we can’t ride to the left, because the two lanes are separated from each other by a crash barrier. We don’t want to go to the right, because otherwise, we would get directly into the checkpoint. When we see that we can’t turn around right in front of the checkpoint, I ride back across a field next to the highway to a gas station. There, we can turn back on a sandy dirt road to get a little further down on the ruta catorce and avoid the critical spot. Suddenly, there’s deep sand and I can’t hold the bike anymore. We fall on the ground, but we’re unharmed. On the other hand, the right pannier got blessures. Since it’s getting dark soon and we’re stuck in the pampa, there’s no other opportunity: we take a photo, lift the motorcycle up, put the pannier on the seat and head back to the gas station. I ride back slowly, while Nicki supports from the side. It’s very exhausting, but we’re making progress. 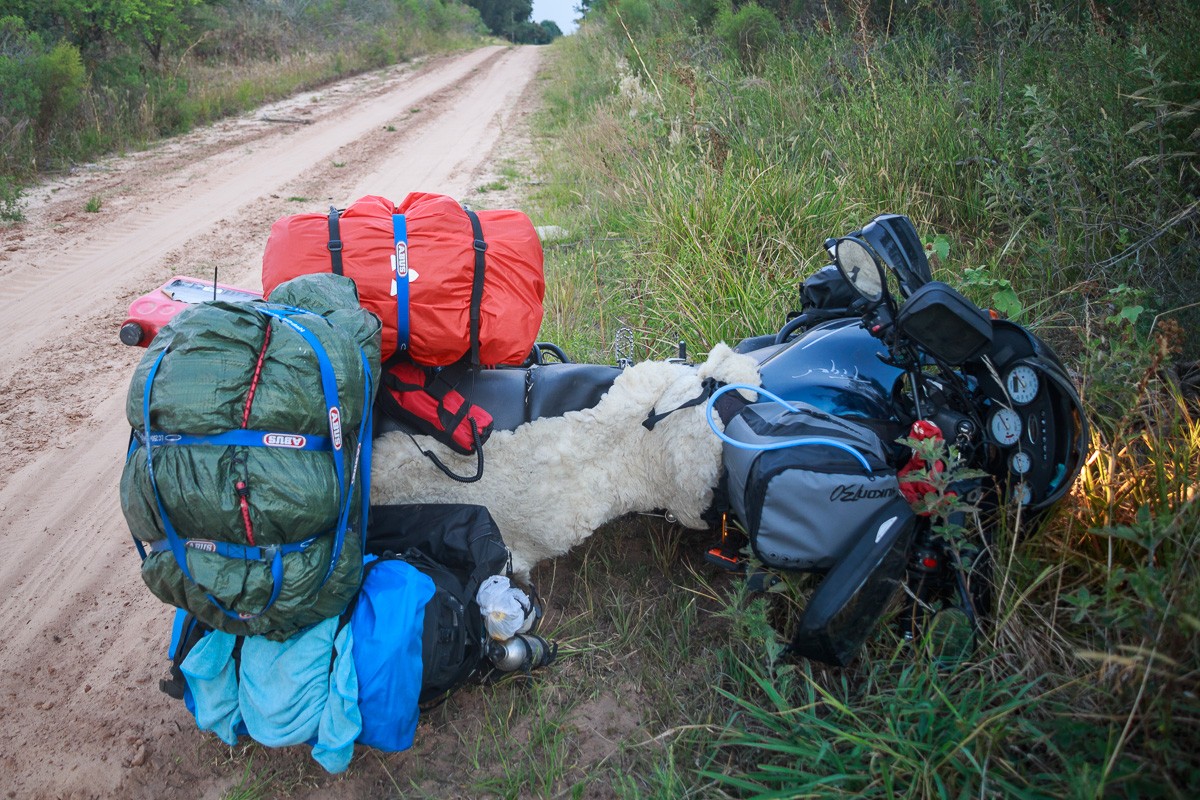 The first fall of our journey, it will not be the last

The pannier suffered a bit

When we reach the gas station, it’s completely dark. We can’t check the pannier till tomorrow, so we build our camp at the most romantic place of our journey. 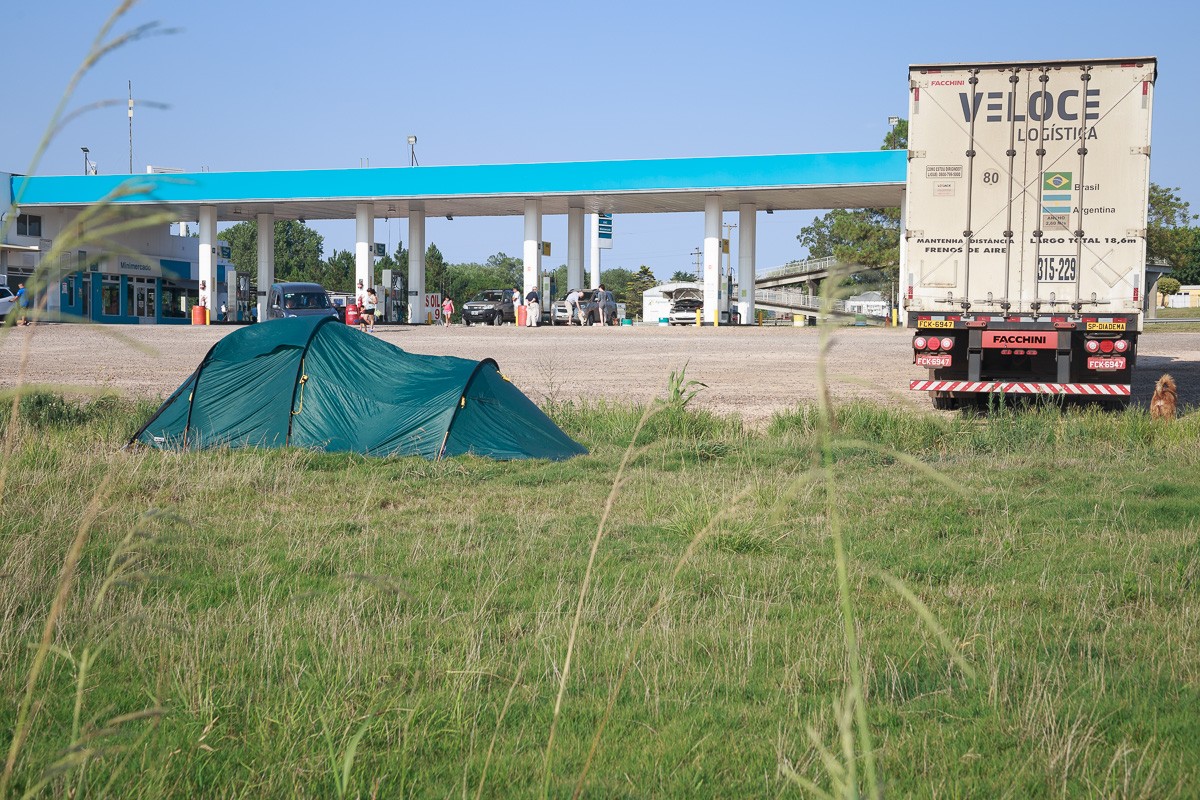 Who needs a campsite?

While cooking, we are guarded by three dogs. One dog, who looks particularly disheveled and keeps scratching himself as if he had fleas, will no longer leave us from now (Nicki: On the picture on top, he is surprisingly far away from the photographer :P. Otherwise, he even followed me to the bathroom…)

An Oil-Exchange can’t be too Hard, Right?

As we wake up in the morning, we are still under siege by this dog. He’s not leaving. With a wrench, the suitcase can be repaired quickly. We decide to seize that we are at a gas station to carry out an oil change that we actually wanted to do in Germany before our departure. We’ve been dragging the oil with us all the time (Nicki: as if the Tiger wasn’t loaded enough…). Unfortunately, the thread of the socket breaks because some jerk just opened the screw with too much power… Our trials to fix it with two-component-metal fail. Four litres of fresh motor oil end up in a waterproof bag (Nicki: sorry at this point to SW-Motech for the misuse of the bag). With this rapidity of oil coming out, we can’t go through the long stretch of dirt road and make it to a garage in town. The alternative to go straight through the checkpoint is not even worth considering.

Franco, an employee of the gas station, has pity and wants to help us, but he has to work until 9 p.m. So we spend the afternoon with our new friend, the shaggy dog at the gas station. In the evening, Franco comes by and brings a lot of two-component-metal. Instead of me, trying to fix it with putting a bit on the screw, he is not stingy with the stuff and puts it all over the socket. I’m confident that this will be enough. We do not have to deal with the problem that no oil can be discharged like that for the next 10.000 km. Who knows, maybe a drill will help. 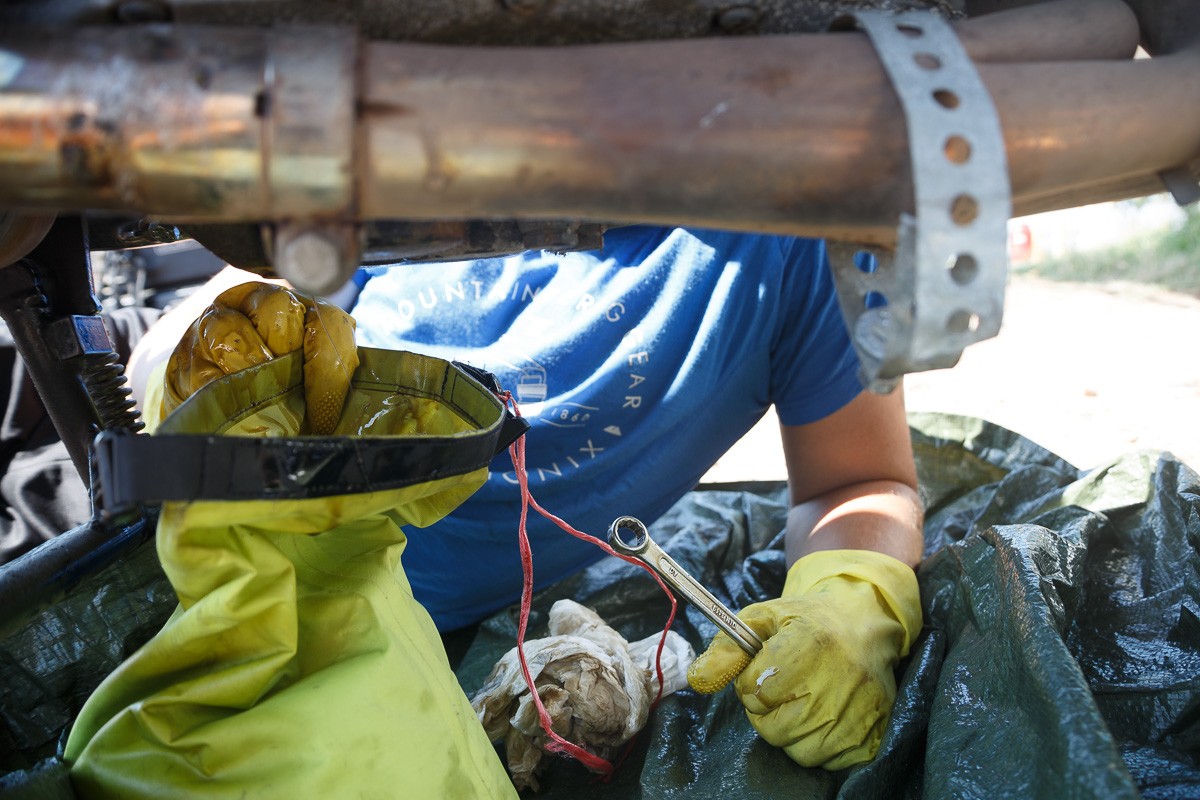 It’s late, so we spend a second romantic night at the gas station. At least, someone is pleased with that: Shaggy remains a good watchdog all night, guarding our tent.

When we refill some oil the next morning, we recognize the uncomfortable reality: a tough, viscous liquid drips down the 2-component porridge. It’s not completely closed. A small crack is responsible for that (Nicki: at this point, I finally lost my hope). What does help? More Liquid. I dry and clean the mass again and grease more on the oil sump. We wait one hour till the stuff dries and risk a new attempt. And – oh, it’s a miracle – it’s finally sealed. The gas station sells its last three litres of oil to us. The Tiger normally wants more, but this must be enough until the nearest gas station. In order not to get into the hands of the police, we ride back through the sandy fields. We have to go through this now. While we’re sizzling in the heat, I wonder if the Tiger carries us or it is not like we carry the bike. Nicki has to get off and walk next to me. This is Moppedhiking! After three hours at snail’s pace and dropping the bike twice, we reach the paved road, both down and out. We ride to the nearest gas station to fill up the rest of the oil. This is where we meet Marcelo, a friendly Argentinean who is thrilled by the motorcycle. He says he’s a mechanic, and if we have something on the bike, we could talk to him at any time and visit him in Buenos Aires. He got contacts all over Argentinia, and then he says – no shit – if we needed an oil change, he’d be happy to do it for us. We ride further to San Antonio de Areco, where the city park has been informally converted into a very busy free camping site. Exhausted from the day, we build our camp and finish the day while we hear music from a stage nearby. 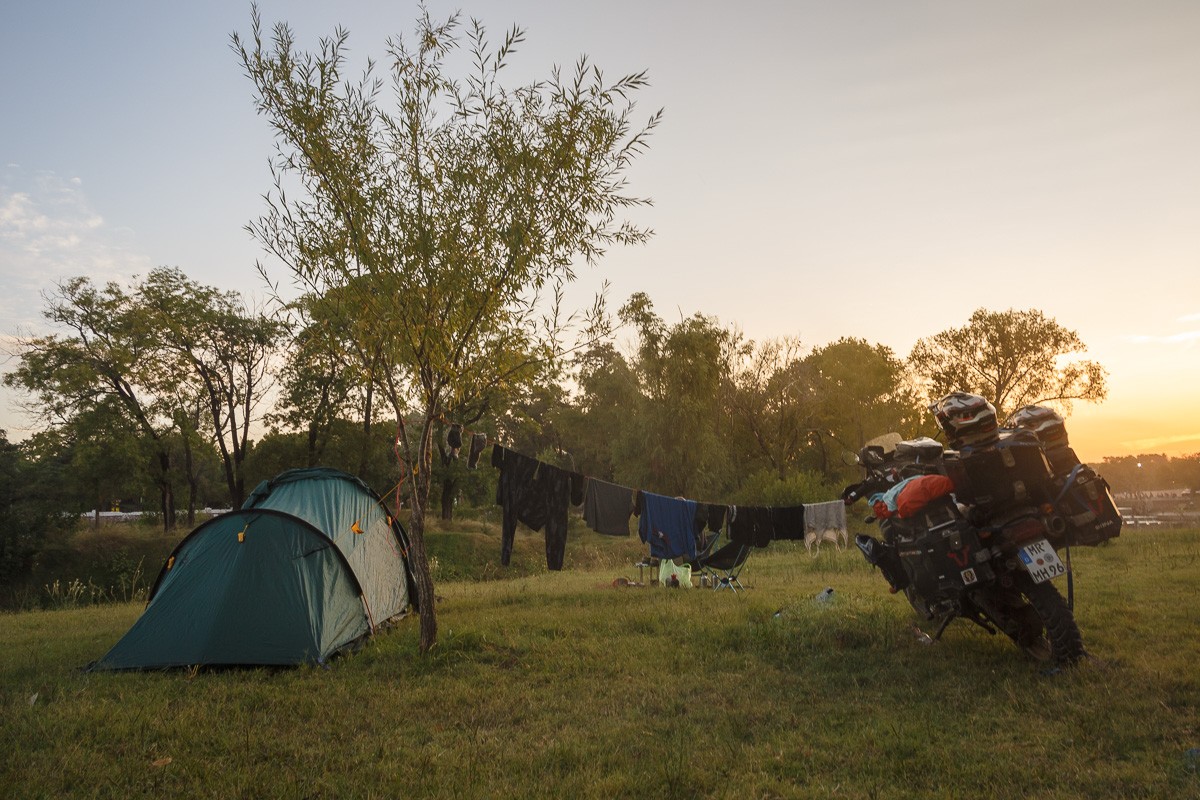 Laundry still had to be washed 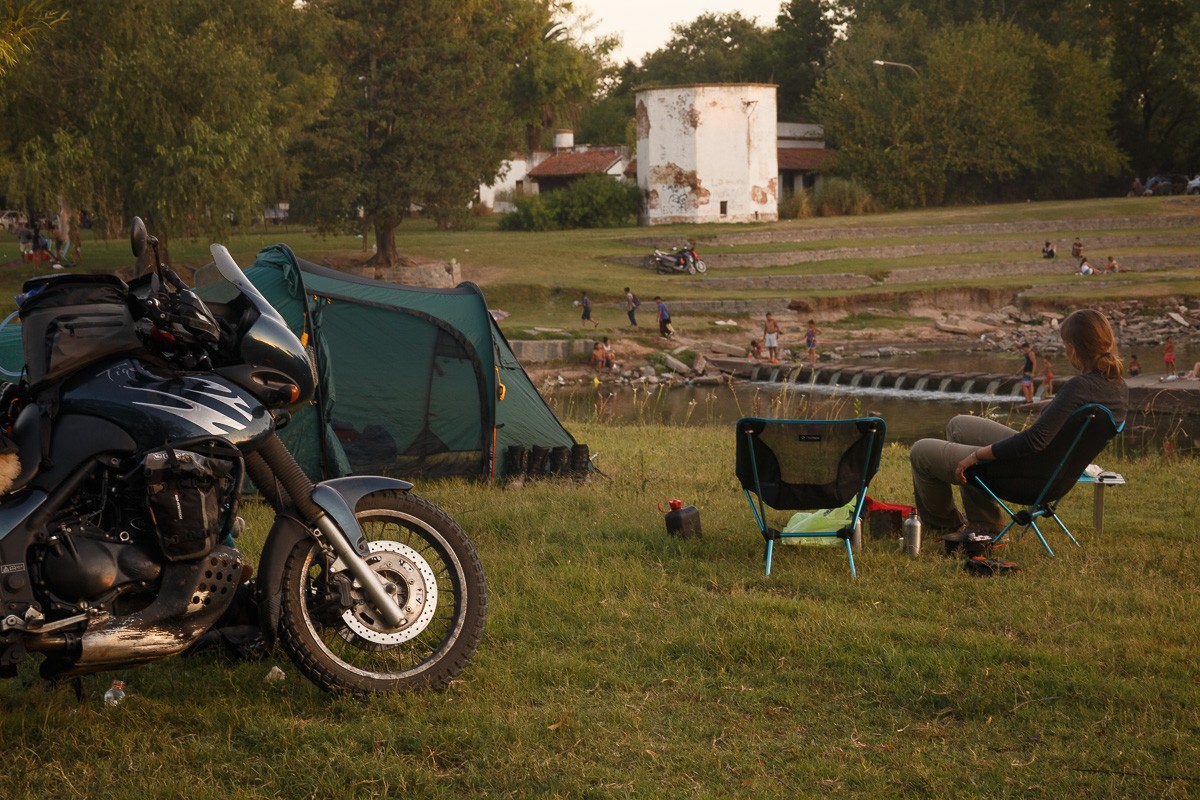 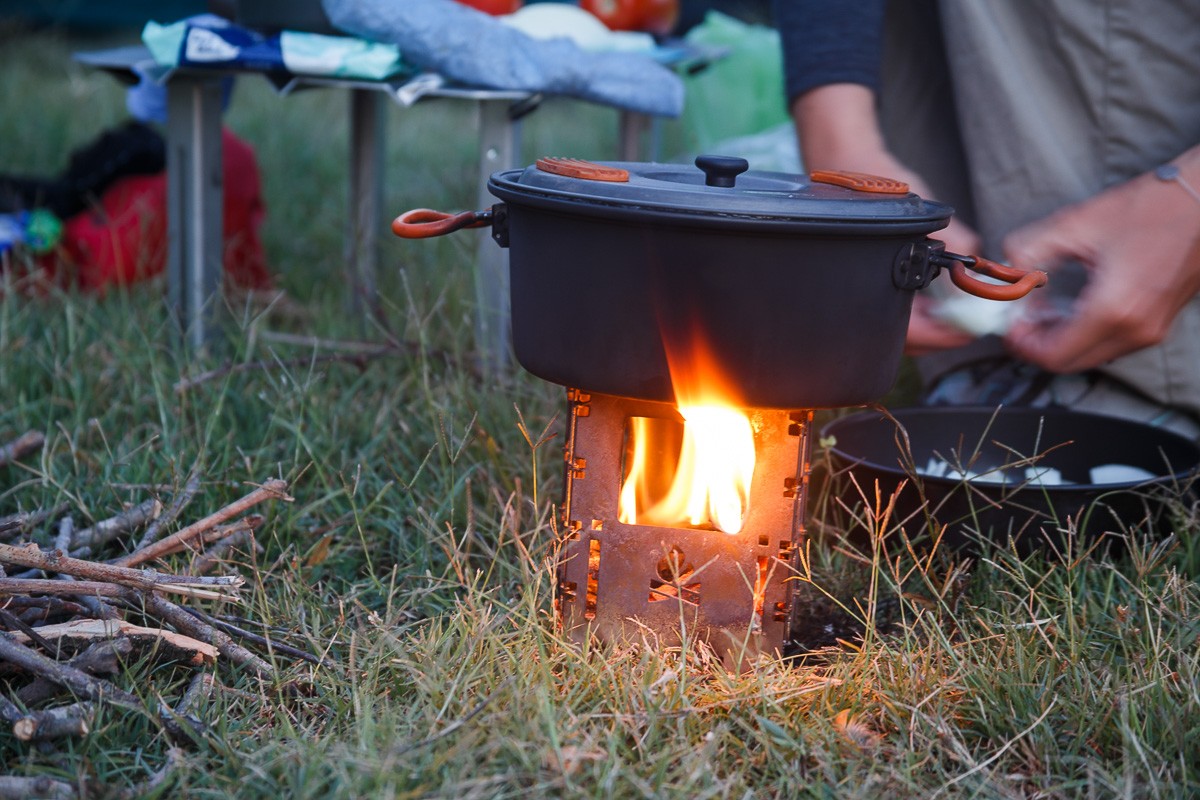 We have really earned this meal