Enthusiasm and Frustration – Our Photoworkshop in Salta

We are in Salta, the largest city in the North of Argentina. Here, we have planned something: as announced in our last article, we want to offer a photoworkshop for adolescents.

We’ve already explained in this article before our journey why we do this voluntarily. It’s just that we don’t want to pass everything on our journey without an exchange. And pictures are an excellent way to communicate and get other insights in local life.

The starting phase of the project has already taken some time. There are many people involved. Afterwards, I guess it were too many.

Firstly, we talk to Katie of our “mother organisation”, the Muskoka Foundation. She proposes projects in South and Central America to us which we could support with our skills. A photoworkshop here, IT support there, or also advice on social media marketing. All projects that serve the common good.

Finally, Katie – our mediator – makes the contact with Cloudhead Art in Salta. That’s where we could carry out a “Portals” project.

“Portals” is an international project that aims to create portals to different places with the medium of photography. If such a project is carried out at a school, the pupils will first be introduced into basic rules of photography in order to create their own images and perspectives of their home. The project was launched by the traveler Stefano Mangini and has been replicated in many different places around the world.

When we meet up with Noah and Leigh of Cloudhead Art, we get to know that the organization and its projects are not as institutionalised as we had thought. The two had carried out a few (photo)projects themselves, but there is nothing planned for now. However, they have a contact with a nun who works in the economically underpriviledged neighborhood “Barrio Solidaridad” since decades. Maybe she’ll find something.

And that’s how we meet the nun Sister Margarita. The small old woman is characterized by the (certainly not easy) life in the neighborhood and can tell many stories of the people here. Most of them are sad: drugs, unemployment, theft, human trafficking.
Many people in the barrio live in precarious, poorly conditions near the dumpsite. Lack of prospects attracts a lot of young men into gangs. These communities seem to feel safer. But they are only being accepted if they proof their “loyalty” regularly. And the women? They often end up as single mothers.

Margarita is in contact with a school in the neighborhood where we could offer our workshop. She keeps saying how important it is to give people perspectives here. To bring them in contact with other lifestyles. So they don’t lose hope.

But first, she wants us to meet a young “bible group” for a round table. She doesn’t tell us much more. We’re skeptical, because we don’t want anything to do with the church. But we cannot refuse this favor for the dedicated nun.

With mixed feelings, we start to prepare a brief presentation of our journey. But it’s difficult. We do not want to present a slideshow about all the “oh-so-awesome” places. “Look, where we’ve all been. You may never get to see this.” But the fact that we had the outrageous luck of being born in the right country is something that we cannot and do not want to hide also. They’ll see it looking at us anyways.
We tell Frank (with whom we are living with at the moment) about our worries. He’s been living in Argentina for twenty years and knows the problem. As a German, you are always seen as “the rich”. It doesn’t matter that we sleep in a tent and cook our own food on the fire. “Forget that people won’t see you like that at first sight. They’re gonna do that anyway.” No, it’s more important to talk about experiences and feelings that each of us knows somehow and to make a connection because of that. “Travelling can also begin in the next neihgborhood”, says Frank. He’s right. One doesn’t have to travel around half of the globe. To travel means going through life with eyes and ears wide open.

Contrary to all our fears, the meeting has no great focus on the bible. We tell the eleven young people our story and then listen to everyone about his or her personal dreams and ideas about the future. Many of the answers go in the same direction. Some say they dream of a great career. Many would like to travel to other places. Everyone wants to find a good partner, maybe start a family.
We are also asked about how it works when you spend so much time with another person…

In a nutshell, the – as simple as important – insight is that we are basically all looking for the one, the big thing: love. It can’t be wrong to remember that more often. Because this need is certainly something we all share with many, many people in the world. 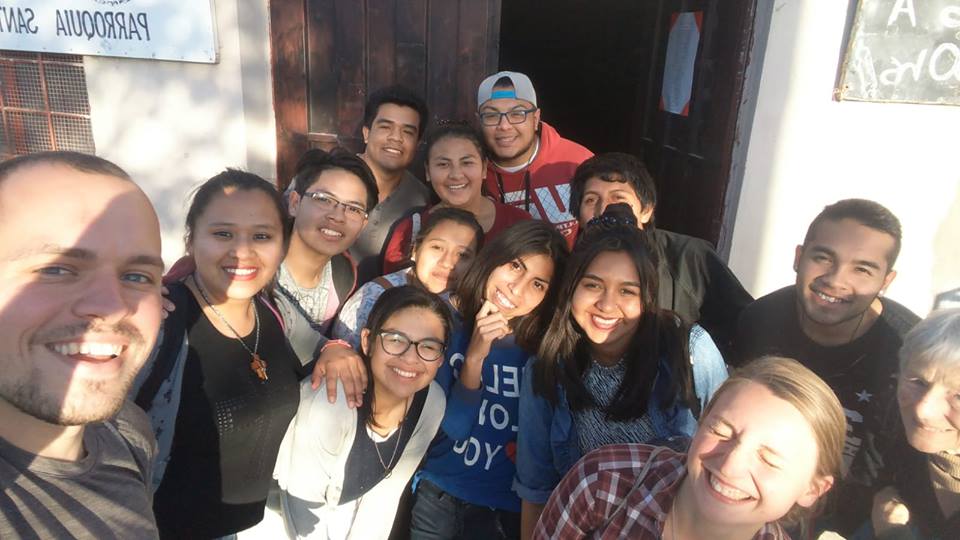 Finally, we make a selfie with our phone

Creating Portals to the World

Back to our photoproject: we meet with the headmistress and a social worker to present our project. From the beinning, we had mentioned to all parties that we are still learning Spanish and cannot speak fluently. It is not good enough to run a complete workshop alone. We therefore wished to have a contact on the ground that can help us with possible translations. But now, we can forget about that. We have to jump in the cold water.

At a second date, we meet the students and students briefly time and agree on four double hours for the workshop. The social worker does not speak English, but she promises us to be present on all dates. That’s a good support.

Nevertheless, at the first meeting of the workshop we enter the classroom with uncertainty and palpitations. I barely got sleep last night. Moe designed the principals of teaching and theoretical input. Now it’s up to me to present the whole thing in Spanish as fluent as possible. It has to be good.

And it is good. As an introduction, we show the students three picture galleries – so-called portals – from Venice, Jerusalem and Antarctica. Then, we discuss what photos are the most impresssive.
When we present our own travel photos to illustrate photography rules, we finally win. A motorcycle in combination with the beauty of Argentina – that works really good. Everyone listens carefully and asks questions.
And so, it’s not surprising that the kids return with super photos on their cameras when we send them to try some of the featured principles in the schoolyard. We are looking forward to the next unit that takes place a few days later.

For the second meeting, the students had the task to think about which places reflected life in their neighborhood. They’re supposed to capture them in pictures today.
When we arrive, the social worker that should accompany us through the neighborhood is sick. Fortunately, there’s another teacher who replaces her. 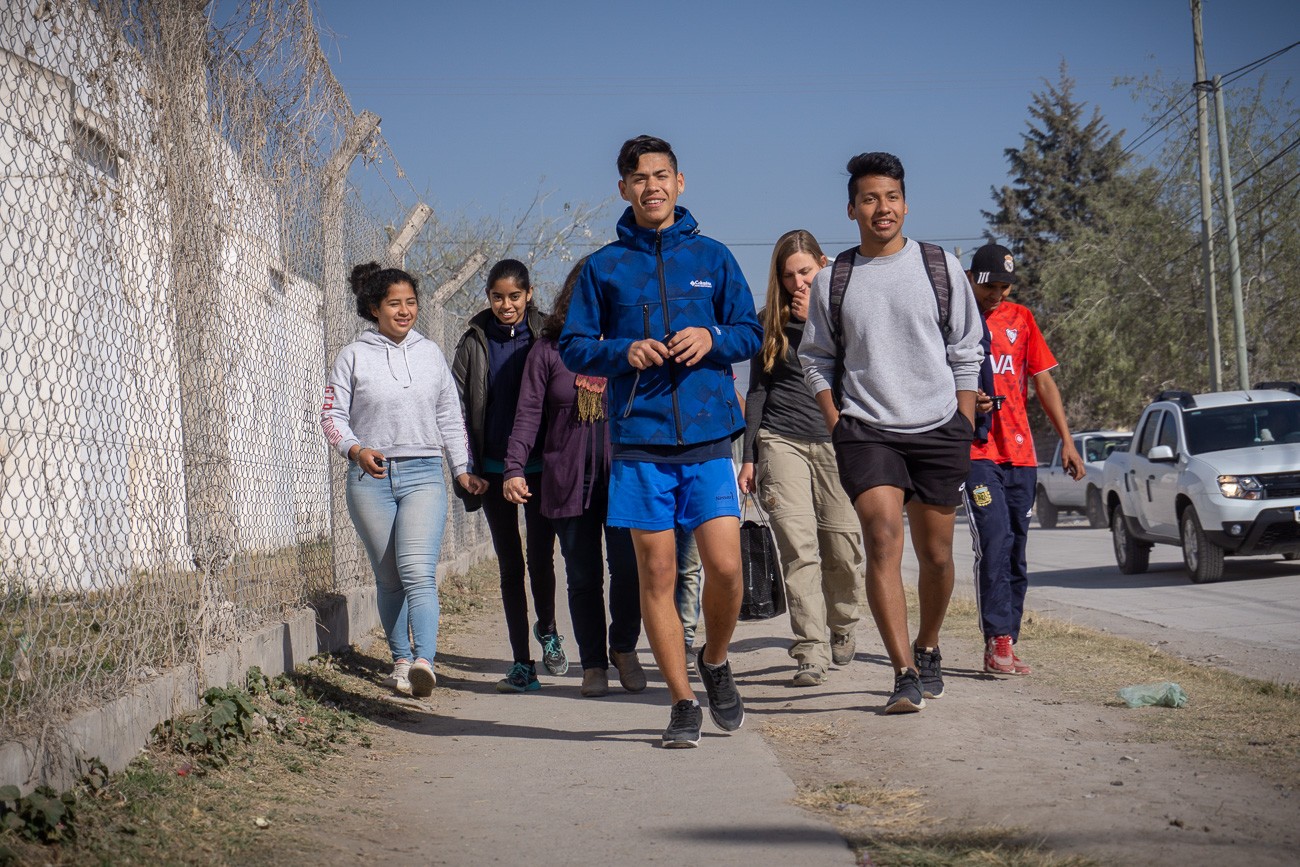 With Enthusiasm, the young people show us some important places of their home. An interesting selection that symbolizes their personal past, but also progress and future of the neighborhood. While we walk through the streets, they choose completely different motives and perspectives than we do. For example, while they proudly present to us the newly built hospital of the neighborhood, which we find rather boring, they want to move on quickly when Moe is interested in a car wreck on the side of the street. That we exceed half an hour doesn’t bother anyone. We have great fun and exciting photos are created.

Here the best photos of the teenagers:

And a few pictures from our percpective:

It would be nice if we could say “everything was great”, but so brilliant the first two lessons are, so much grows our frustration in the further course of the project. This is entirely due to the organisational inability of the school.

The fact that the students are always incomplete, we have to wait for them for a long time, or we cannot use the previously guaranteed projector are things that we can ignore with some serenity and improvisation.
But when the agreed dates simply are cancelled, the mood changes. Each time the reasons are different. Either the kids are in another class (couldn’t they have known that before? ), or they said that they expected us at another time (couldn’t they have been able to write down the agreed time? ), or the contact person at school is just not there (couldn’t they let us know before?). That way, we are constantly being told that the workshop will continue next time.

Yet still, one of the appointments takes place. After an hour of waiting, only four students show up (no wonder with this organization), which ruins our planned teaching concept.

We wanted every child to choose and present her or his favorite pictures so that we can go through all the photos afterwards and choose the best together. But how is that possible if the photographers aren’t there? Instead, there are completely other children in the room. “Just take them for your lesson”, recommends a teacher. The fact that this does not make any sense does not matter. And so, we have no chance of continuing our project. We’re trying to make the best of chaos spontaneously. But we are not satisfied with the outcome of this lesson.

On the following dates, we travel to the school in vain as described above. Finally, we choose the best photos of the kids ourselves, so we can at least print them out and hand them over to the children. But that’s also not supposed to happen. When we arrive at the school for the fifth time and nobody’s there, I complain to a teacher who has nothing to do with this. I’m sorry he’s the one who gets to feel my frustration, but there’s no one else there. After all, he informs the headmistress about our dissatisfaction with the outcome of this project. At least, she apologizes to us later, if not personally.

We are seriously wondering how such an organization can lead to a normal school routine. In the end, we are left with only the bitter aftertaste of lack of appreciation of our time, instead of an answer. And, of course, the compassion for the great students who are not to blame and maybe also wonder how this could happen.

The chapter ‘photoworkshop’ is now completed. But “Portals” is a great project in our opinion. We would really like to start a similar project elsewhere, but certainly under other organisational conditions. We do not only want to show you the images that have been created but also the participants of future workshops.

After that, we spend some more time in Salta with the Neumanns. In exchange for board and lodge we help in their cultural centre while we are still waiting for a package with spare parts from Germany. Besides, we are also working on a large project for the financing of our journey, which we will present to you in the future. So, it stays exciting!