We are leaving the familiar, the “almost-like-Europe” and go to Bolivia, where – after almost ten months of Uruguay, Argentina and Chile – things are a bit different.

Bolivia is Testing Us

At the beginning, we summon all our courage to ride the adventurous lagunas route. It runs through the high desert and is known as one of the toughest but most beautiful tracks of South America. We will publish a detailed report about this somewhere else.

Then, we ride further to the Southwest of Bolivia, crossing Tupiza and Villazón before we take one last detour over Argentina. Apparently, few tourists visit this area. We like it here pretty much because it is a continuition of the colours and shapes of the mountains that we could already admire in the North of Argentina and Chile. 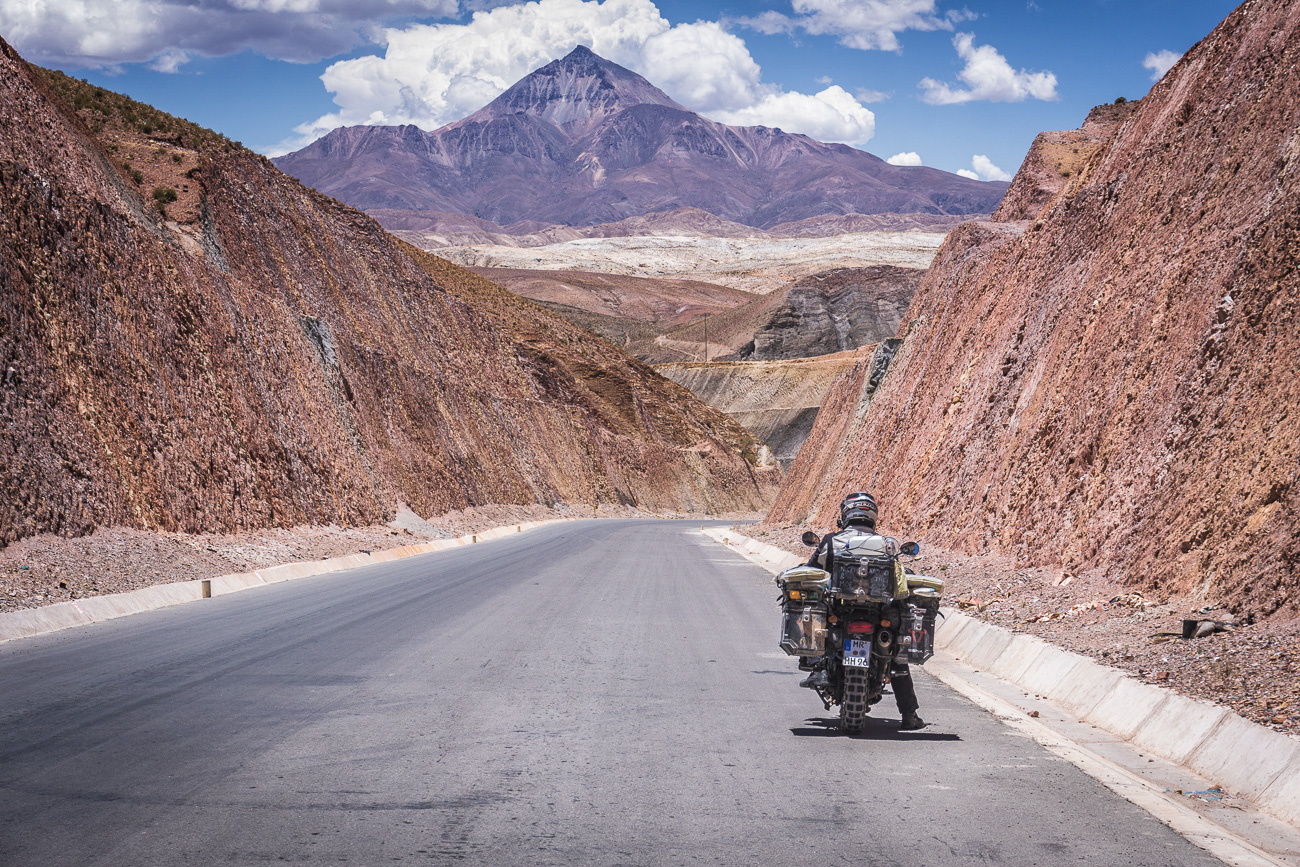 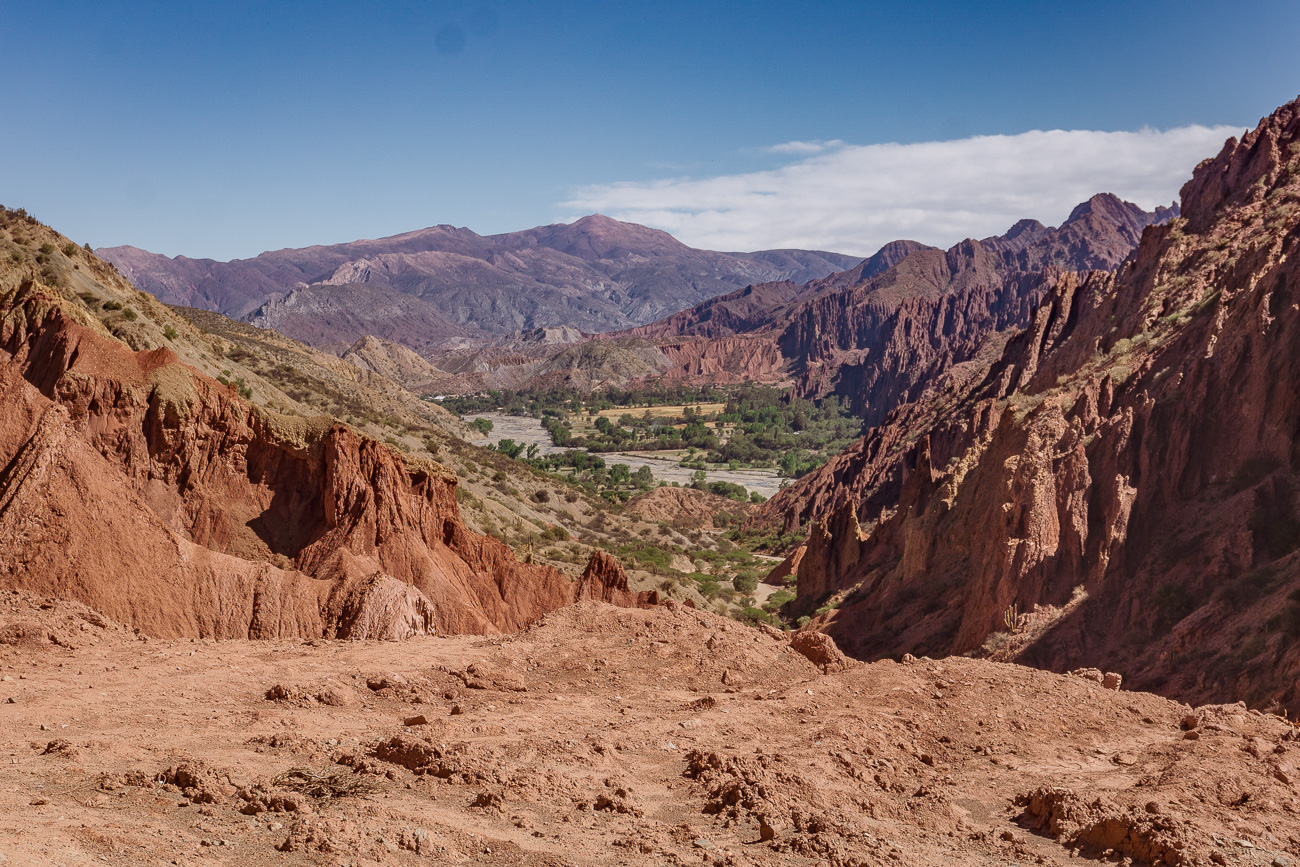 Not far from Tupiza, we discover two young men standing next to their motorcycle on a construction site. A glitch in the middle of a construction site – that seems familiar to us! We’re stopping to see if we can help. We don’t have a lot of valuable knowledge but at least some tools. In fact, we have the appropriate key with which we can dismantle the rear wheel of the motorcycle. A nut of the chain wheel is missing, and now the rear wheel is loose in the swing. Unfortunately, we do not have the appropriate nut but the two think they only need alambre. We show them our entire tools, but alambre seems to be missing. Then the translation app helps us: it’s wire. How can wire help? While we’re thinking about it, one of them runs to a truck. The other one tells us that they’re coming from the 20-kilometers-away Tupiza. They will certainly find an SUV or truck that will take the little motorcycle on the back and bring it to the next workshop
Now the one has returned with wire. I hardly believe my eyes when he tries to replace the missing nut through wrapping it around the screw. Then he ties the rest of the wire to the rim. I’m looking at Moe with wide-opened eyes while he can barely refrain from laughing. “Are they serious now? They can’t go on like that!”
Yes, they can! The wheel is mounted quickly. I internally throw my hands up in horror. If that is ever going to last, it won’t hold longer than two miles. But the boys are confident and say goodbye to us.
Finally, when the two finally start riding in the direction where we just came from, I loose every bit of faith. There is nothing in this direction for the next 170 kilometers. Nada. The tire is still terribly loose while they are chugging away.
I do not want to keep thinking about what could happen. I’d rather admire their improvisation and especially this confidence that it’s all going to be fine.

This trust may also come into play when overtaking in curves. Which does not rarely cause us to curse because we are the weakest on the road who have to think about where we are swerving, when the traffic is suddenly on our lane. We do not know where we should be more afraid of our lives: on the country roads described above or in the larger cities where they switch lanes without flashing or looking to the side as it suits and also like to stop suddenly in the middle of the lane without any notice. There’s anarchy here, and if you don’t learn to take your place in traffic, you loose very quickly.

But maybe it helps if you believe in lord Jesus. Because every bus, van or small car has some fun labels and trash stickers à la “Jesus is my guide” attached to it. If you have your holiness himself as a companion, you will surely be spared from the consequences of mad driving. You just have to believe strong enough!

I know I am evil now. But evil is also when you see a truck driving straight towards you. I didn’t start praying in this moment though. 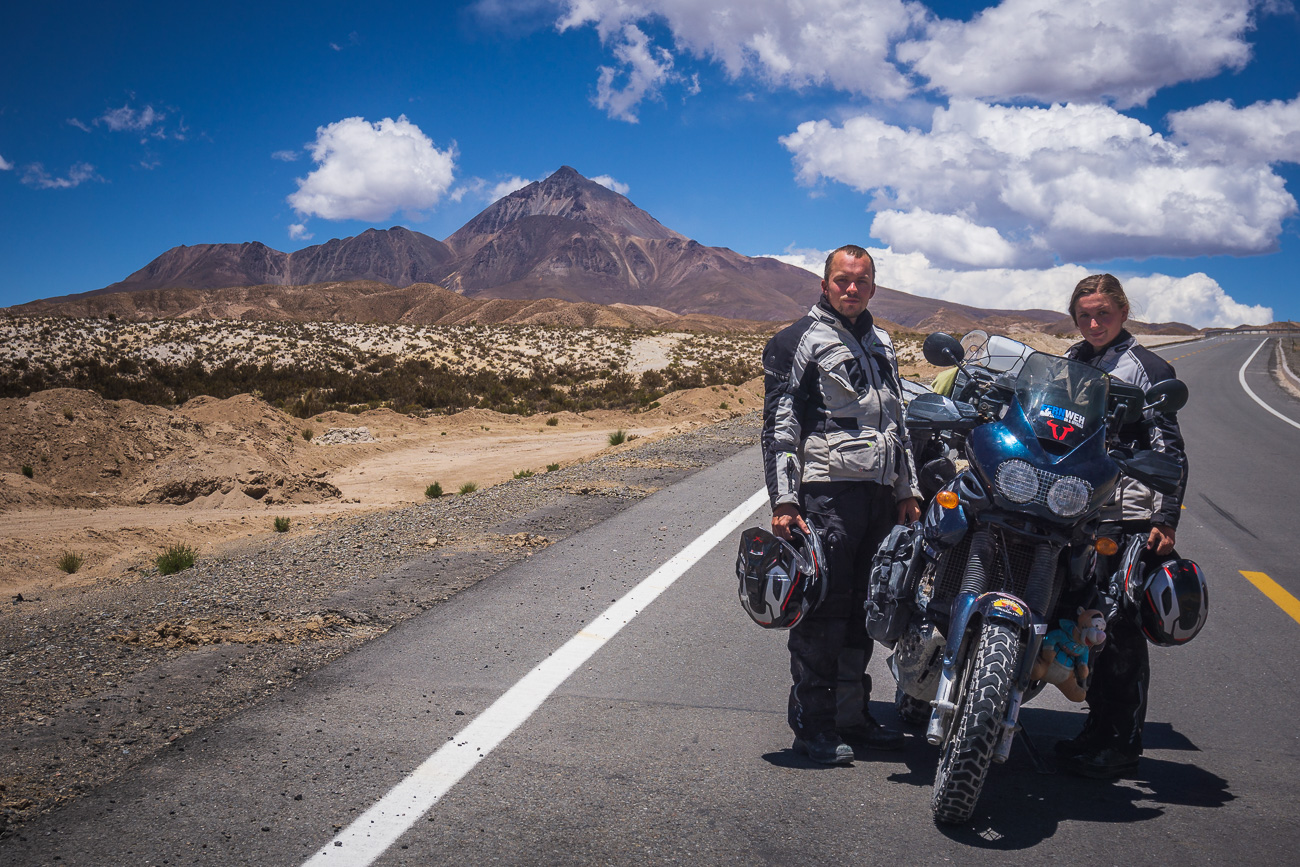 Shortly after taking the photo, an oncoming bus almost hit us

And at the beginning, we’re really euphoric. First of all, we did only know little about this country but we got a better impression of the culture and living conditions through our observations and in conversation with locals.

In terms of economic and social indicators, Bolivia is the poorest country in South America. At the same time, however, it is rich in landscape and culture. The indigenous population – mainly descendants from the Aymara and Quechua – is with around 60% in the majority. Bolivia’s first president with indigenous roots, Evo Morales, has been permanently in office since 2005 (although the constitution does not allow that…) and has a seemingly large support in the population. At least when you may believe the support on every wall, on every stone, on every post… Evos charismatic head is everywhere!

Just like the cholitas. This is how the indigenous women who dress traditionally are called. Melone hat, colorful scarf and puffy skirt. Two long braids which are held together with a cord. A few years ago, cholitas were still very discriminated against. However, since the last 10 years, they have gained both social and economic importance. Now you see cholitas in a variety of professional positions. They’re always a little grumpy towards us. I don’t think I’ve ever heard such a tough, rough “como estas?” like a seller of a little shop asked us. If questions could kill… just lovely!

But there are also people who can smile. On the tiger, we receive numerous thumbs up – even from the police! 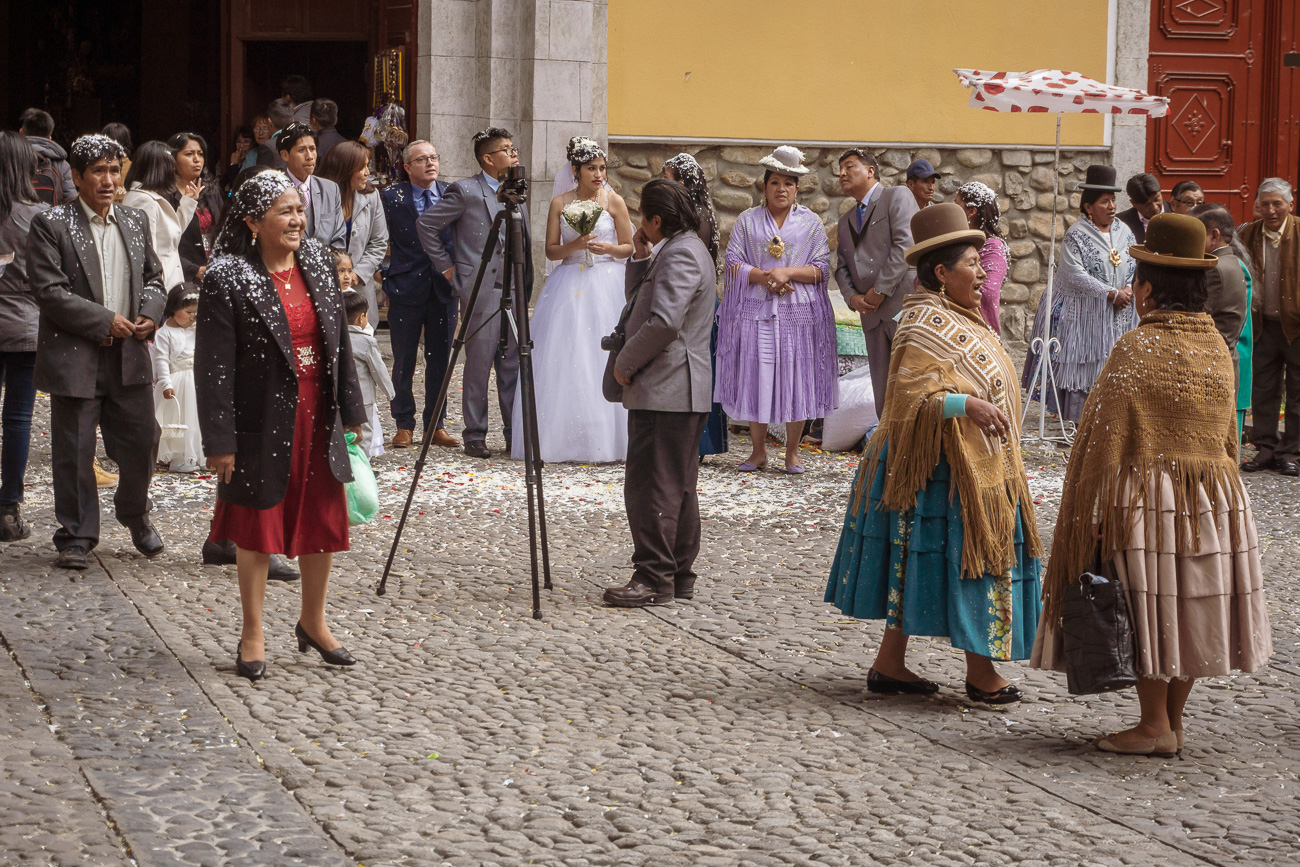 Cholitas dressing up in their best clothes for a wedding

It can be complicated to refuel in Bolivia. In any case, if you are not willing to pay the double price they invented for foreigners. In addition, many attendants do not want to sell to foreigners at all because the settlement of the foreigner price means an increased bureaucratic effort for them. The solution: canisters. You park outside the gas station (since there are surveillance cameras everywhere) and go with the canisters to the gas station. Sometimes you have to bargain, but this is very simple in Bolivia:
“That costs 80 BOL.”
“That’s a lot.”
“Okay, then 40.”
However, the gas has only 87 octane which will cause the tiger a few problems later…

No Camping This Time

Even though we are trying to avoid big cities, we cannot pass them on our way through Bolivia. There are almost no camping sites here. So, we ride through Tarija, Potosi, and Oruro to Cochabamba. We are pleased that we can finally afford accommodation here in Bolivia, even if it is often in a very, very simple condition. The rainy season is starting slowly and it’s pretty nice to have a roof over your head at night. We can also go out to eat regularly because a menu only costs 2 Euros.

Welcome to the Jungle

From Cochabamba, we make a detour to the Carrasco National Park. So, we ride from the high altiplano where we are most of the time over 3500 meters of altitude down to 400 meters. We find a very nice and very quiet place that has been built with some effort and love. The small family running the ecological park integrates us directly. Here, all animals live free and peacefully alongside, a huge selection of tropical flowers and fruits is growing and blooming.

Because it’s so beautiful here, we stay a little longer and enjoy the time in the middle of nature. We spend our day watching ants doing their heavy work, playing with the children and tasting the variety of fruit we have never heard of before. 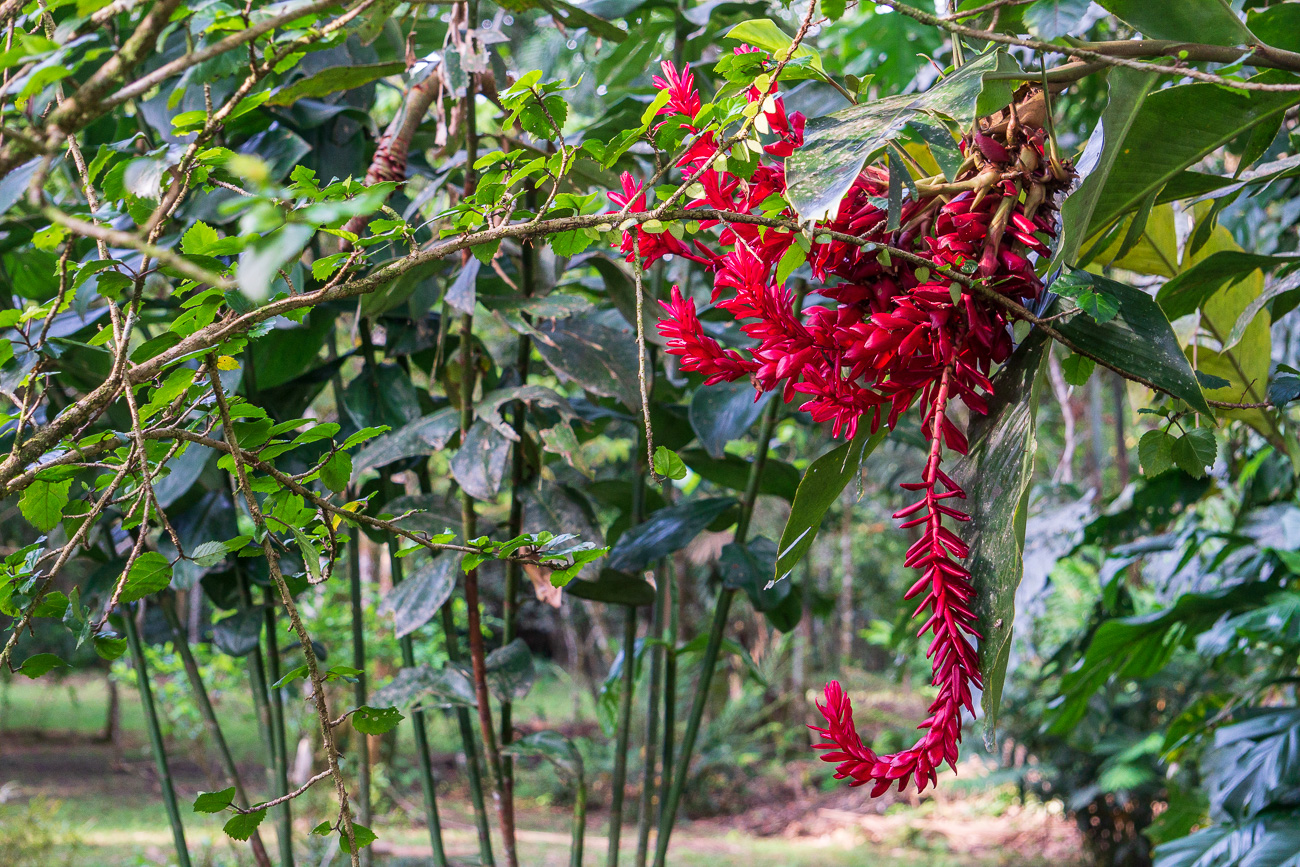 Because of the rainy season everything’s blooming now 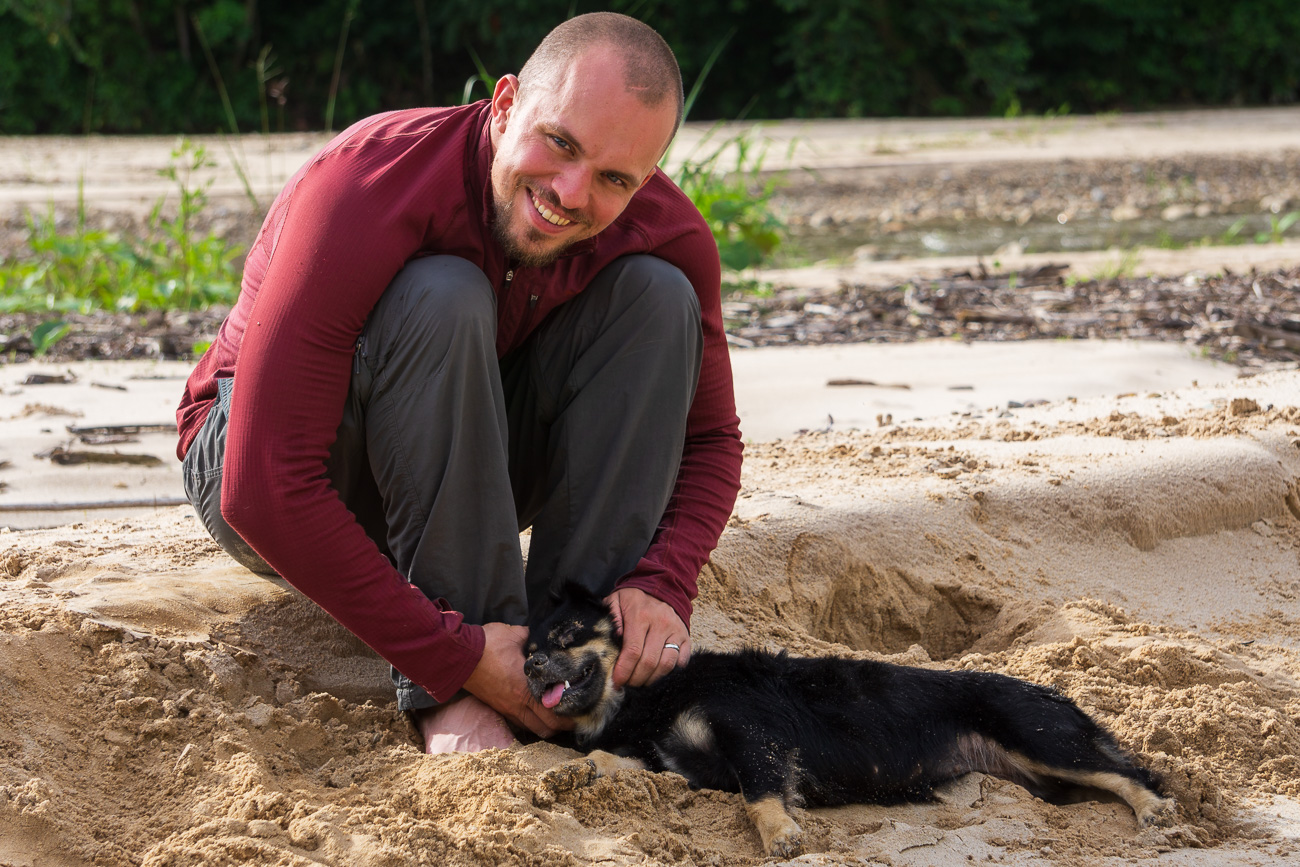 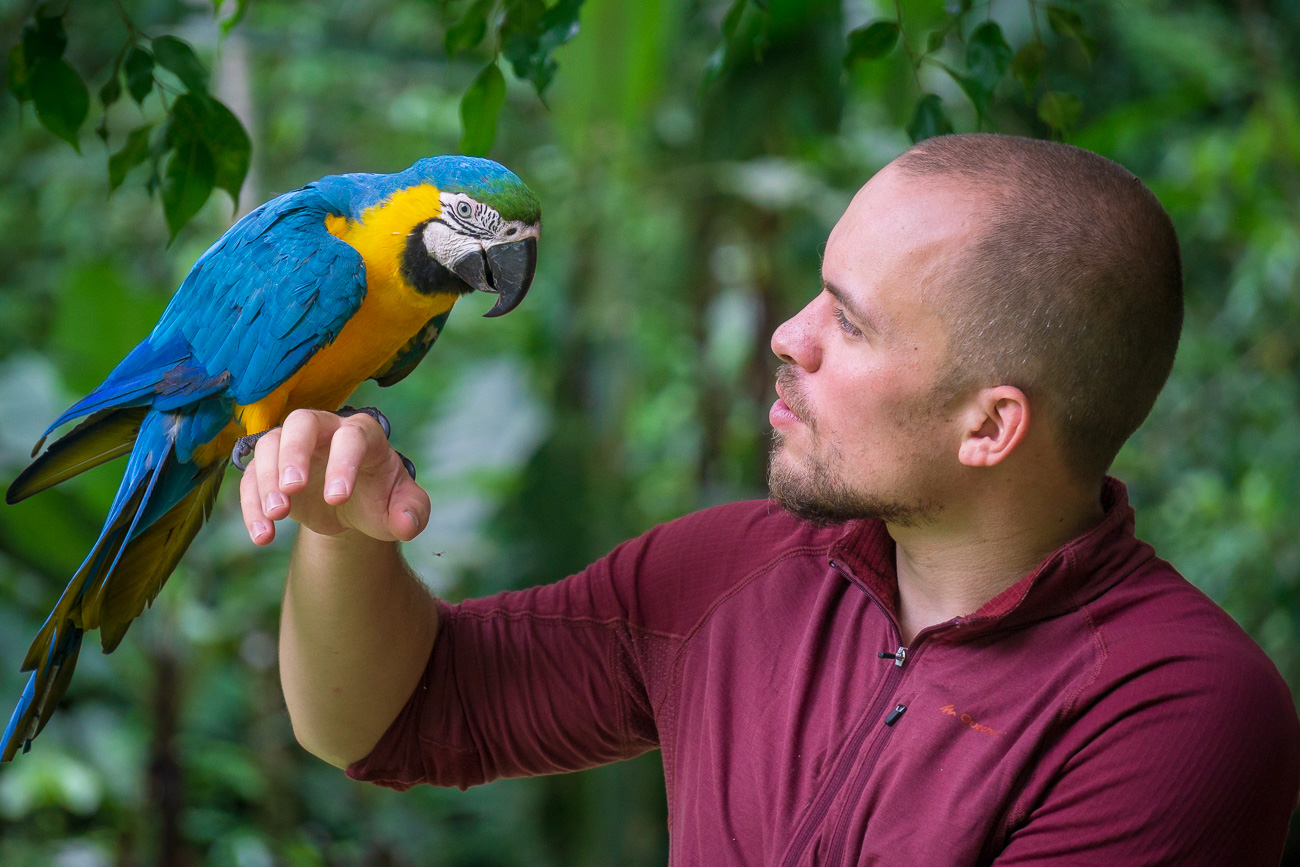 Luciano is our favorite! He lives on the tree next to our tent and loves contact to people 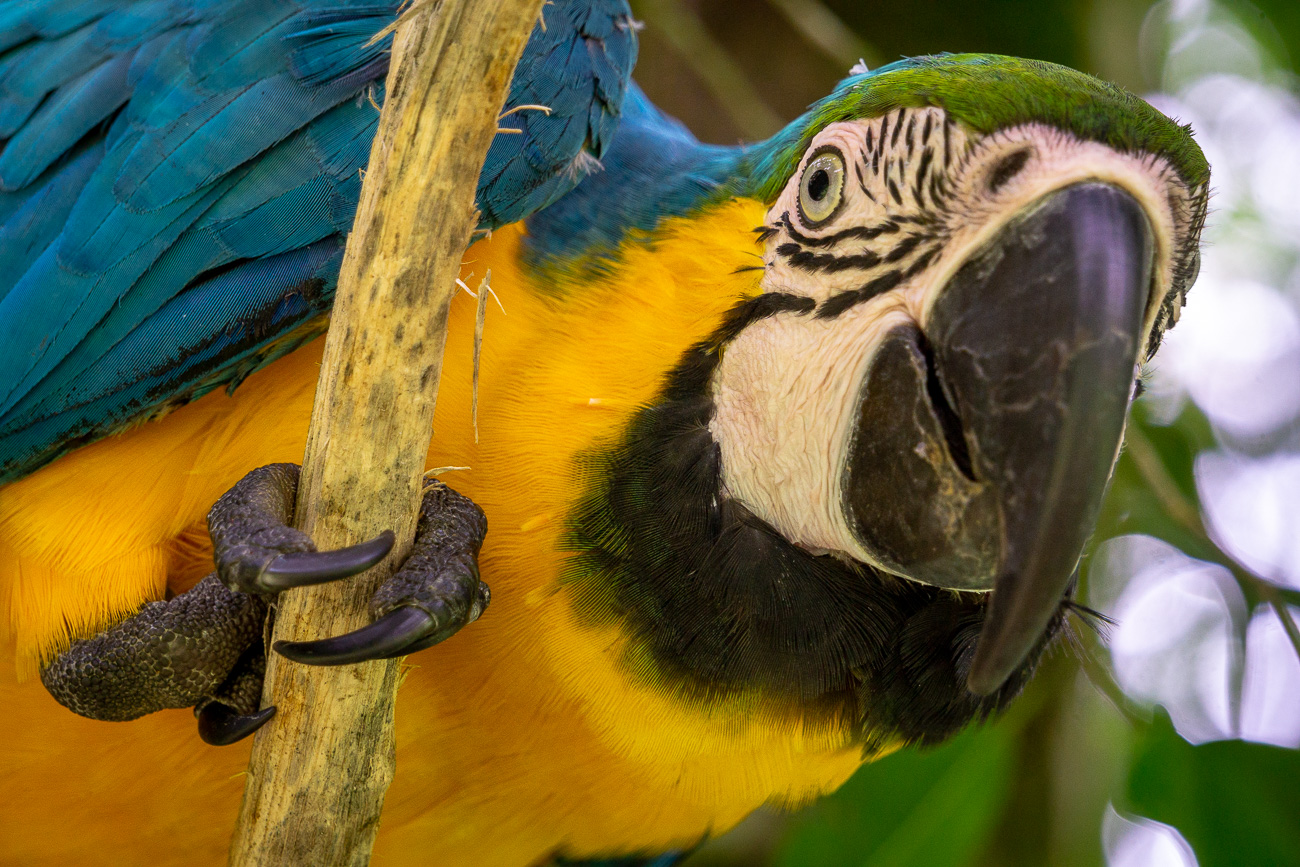 What a beautiful parrot! 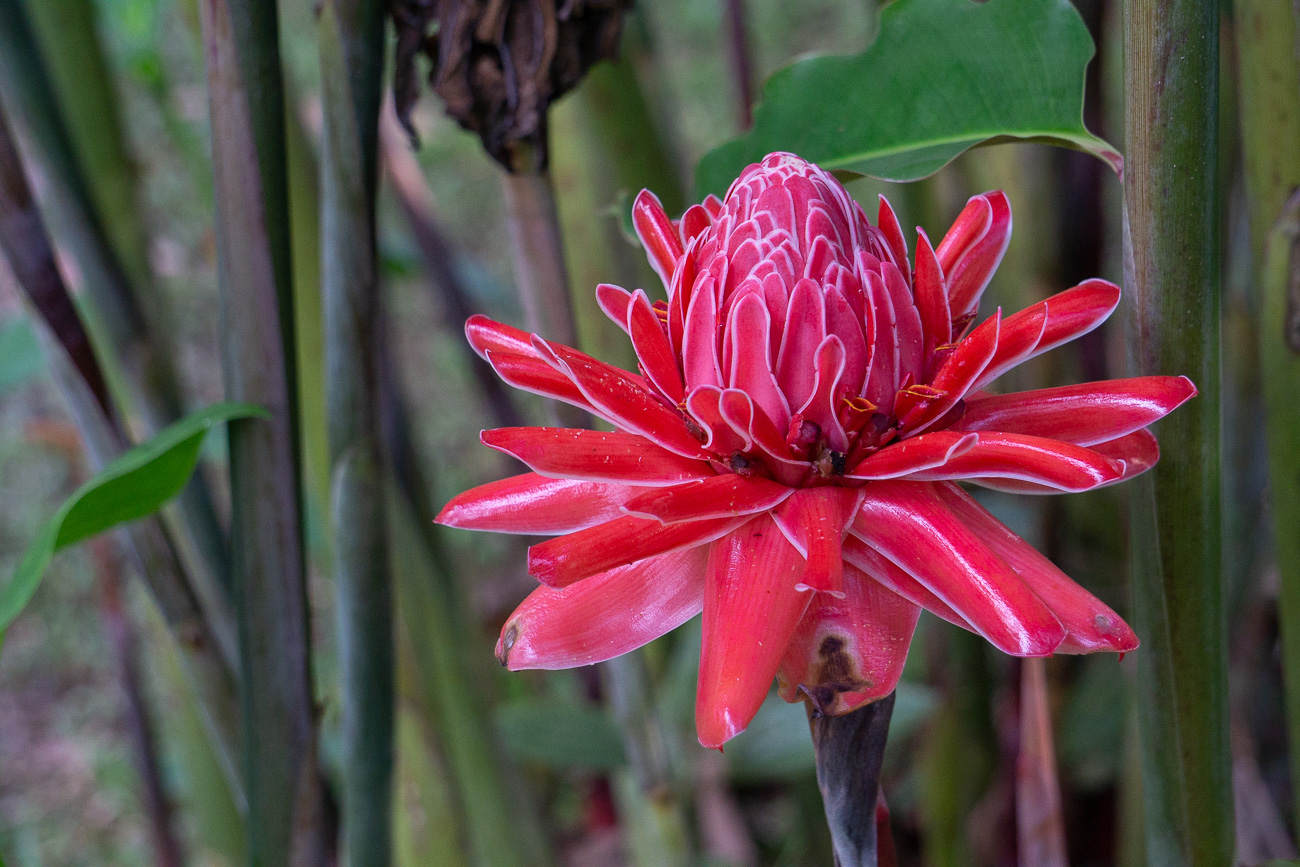 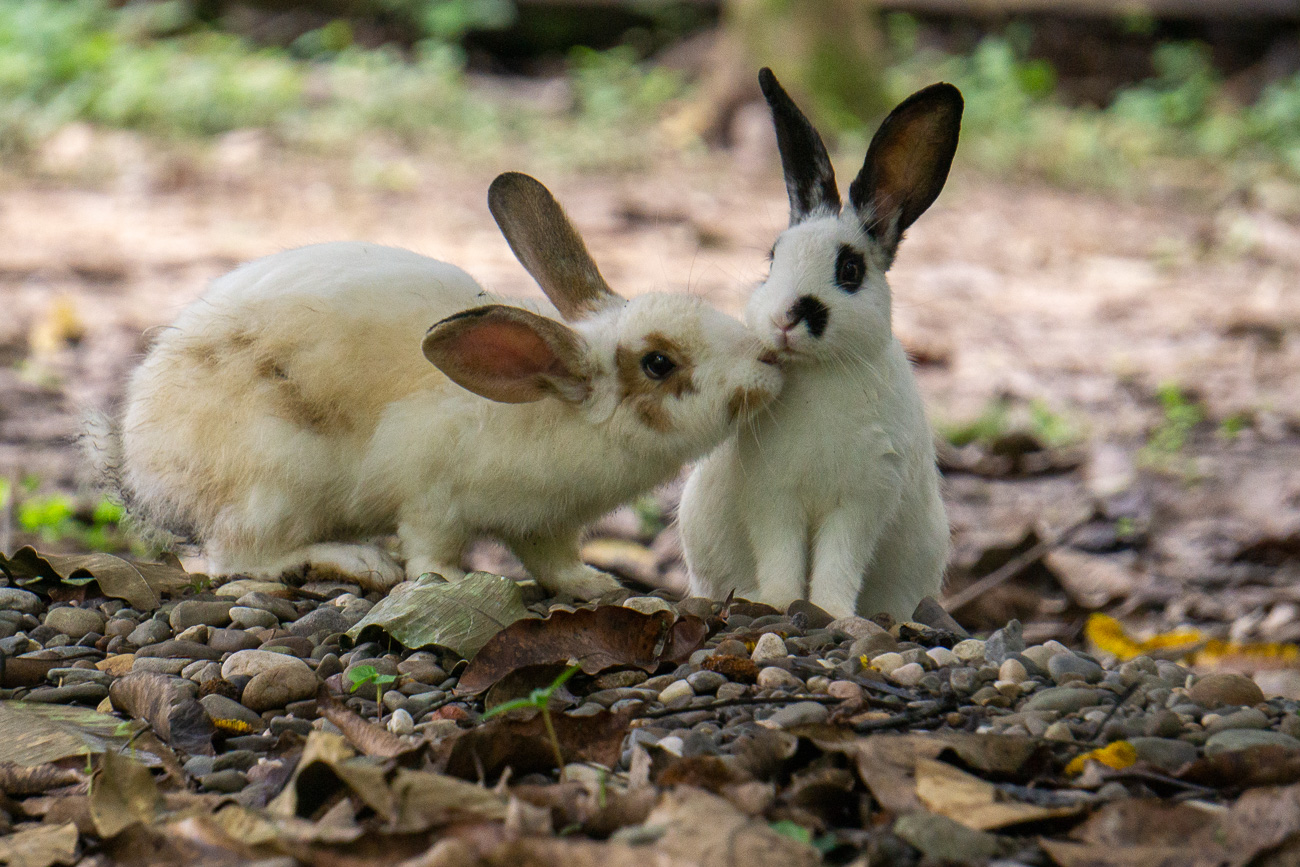 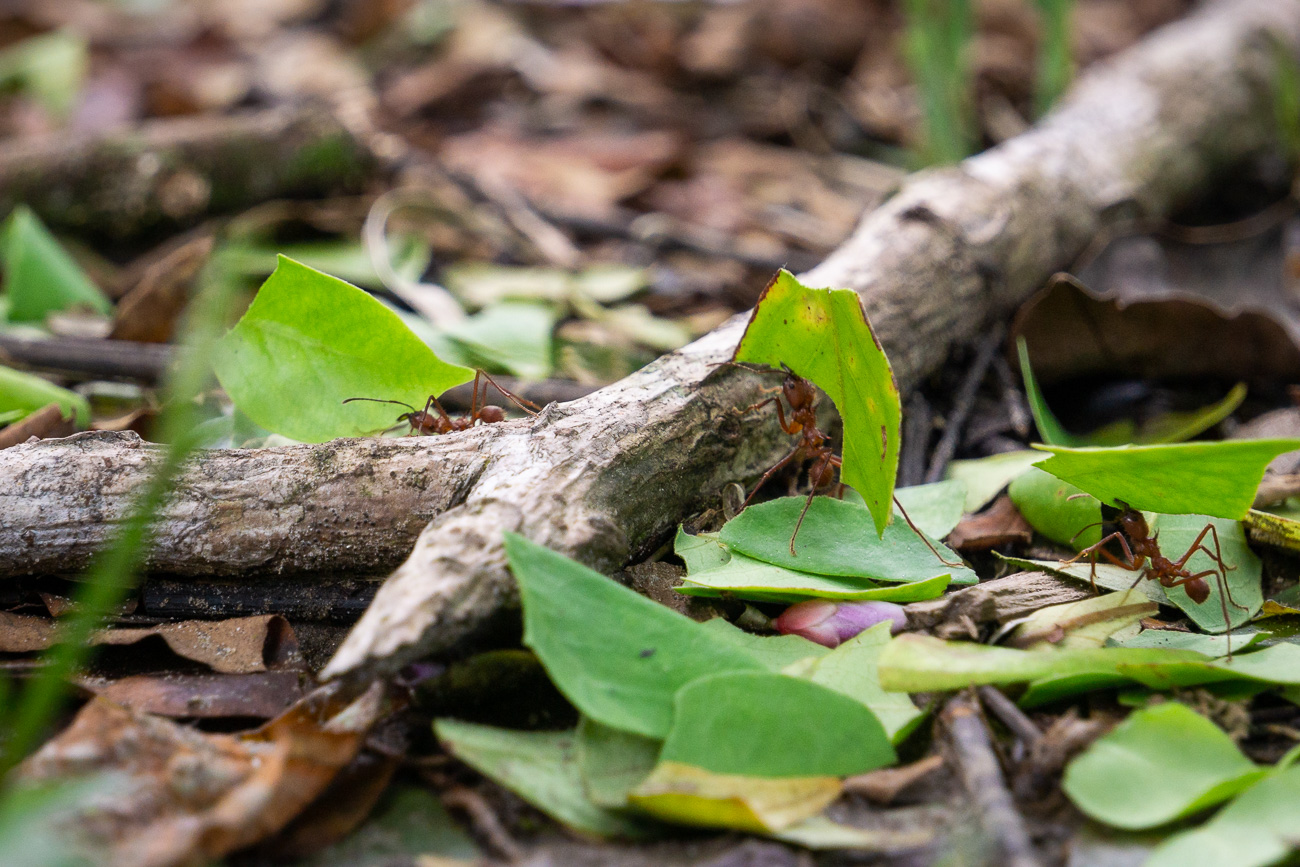 Ants can carry the 7-fold weight of their own body 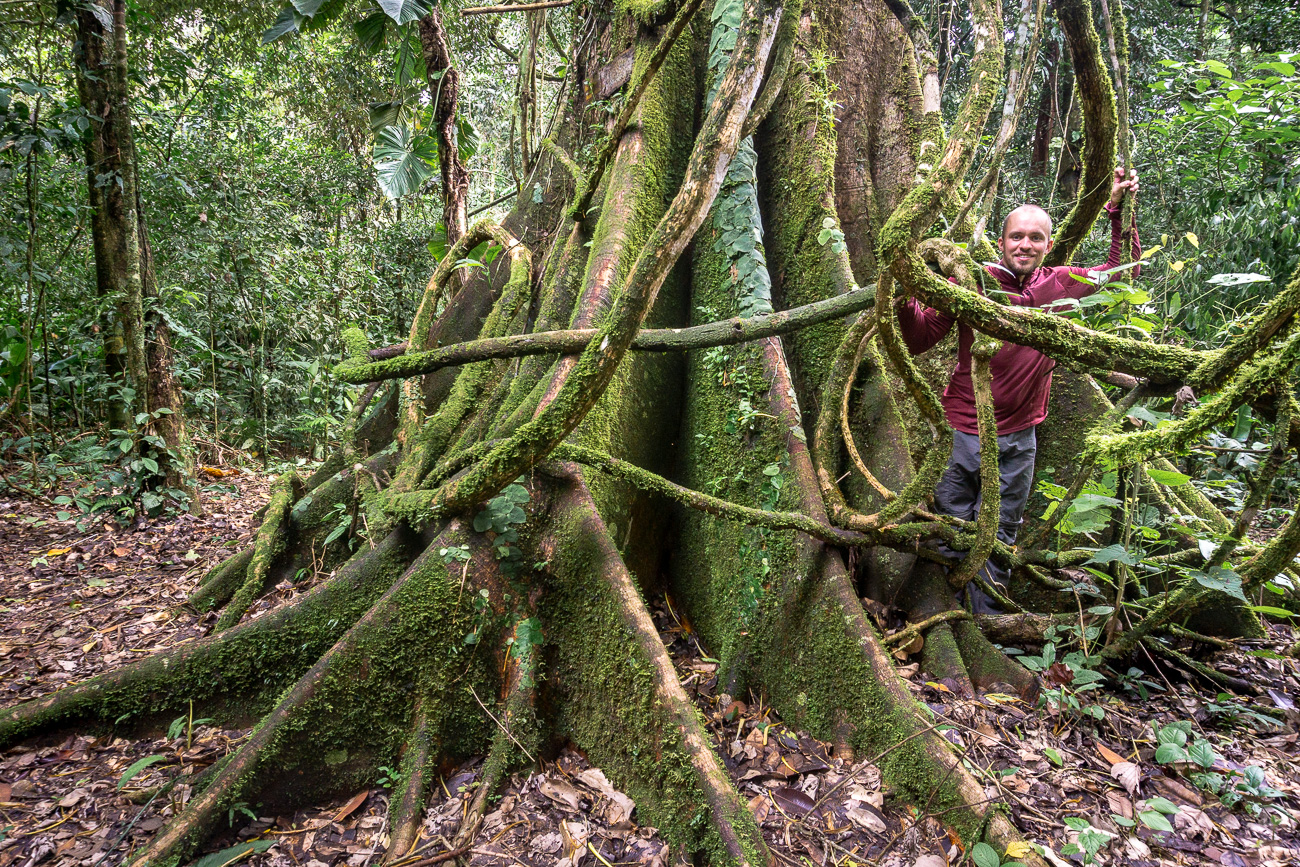 Should I rescue him? 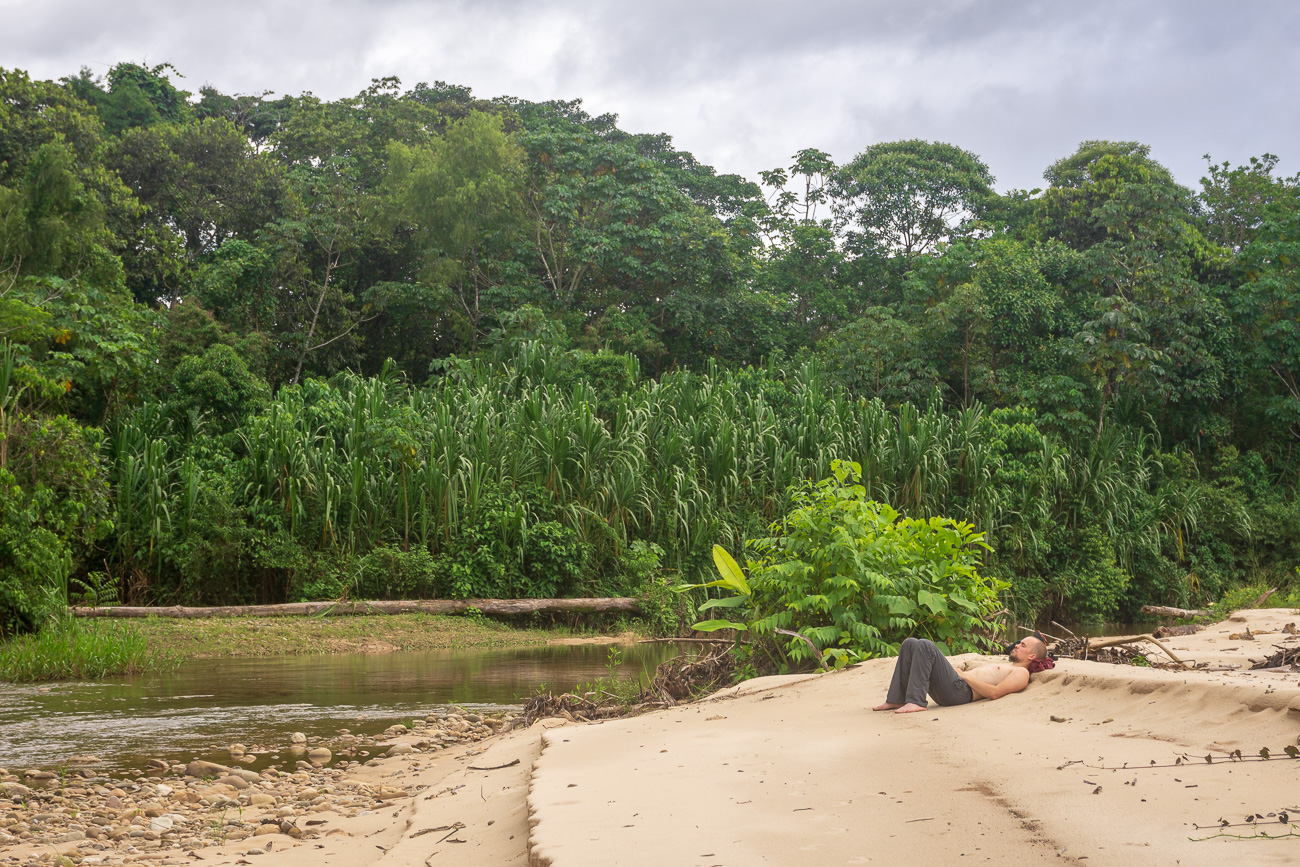 An the river, we keep looking for monkeys 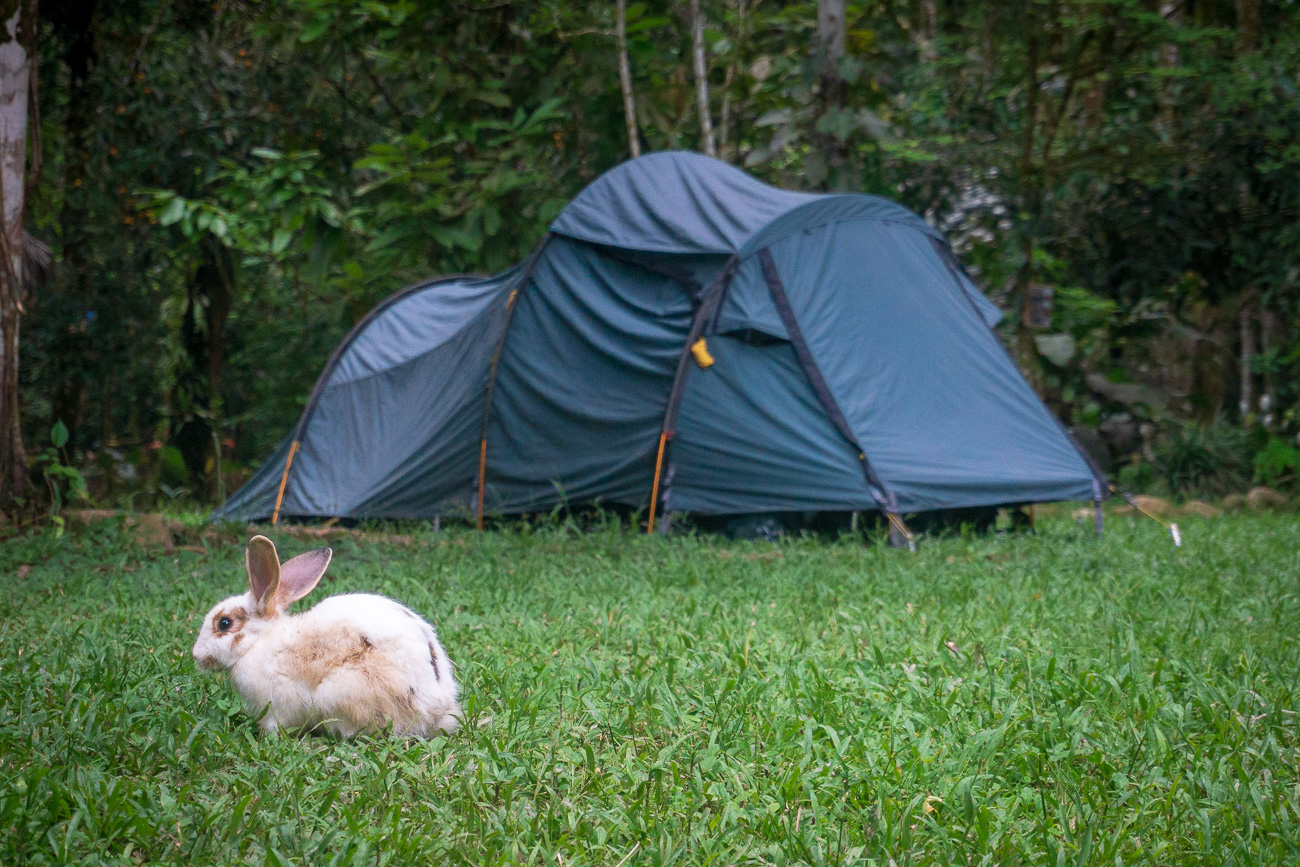 Every night we hear heavy raindrops chrackling on our tent 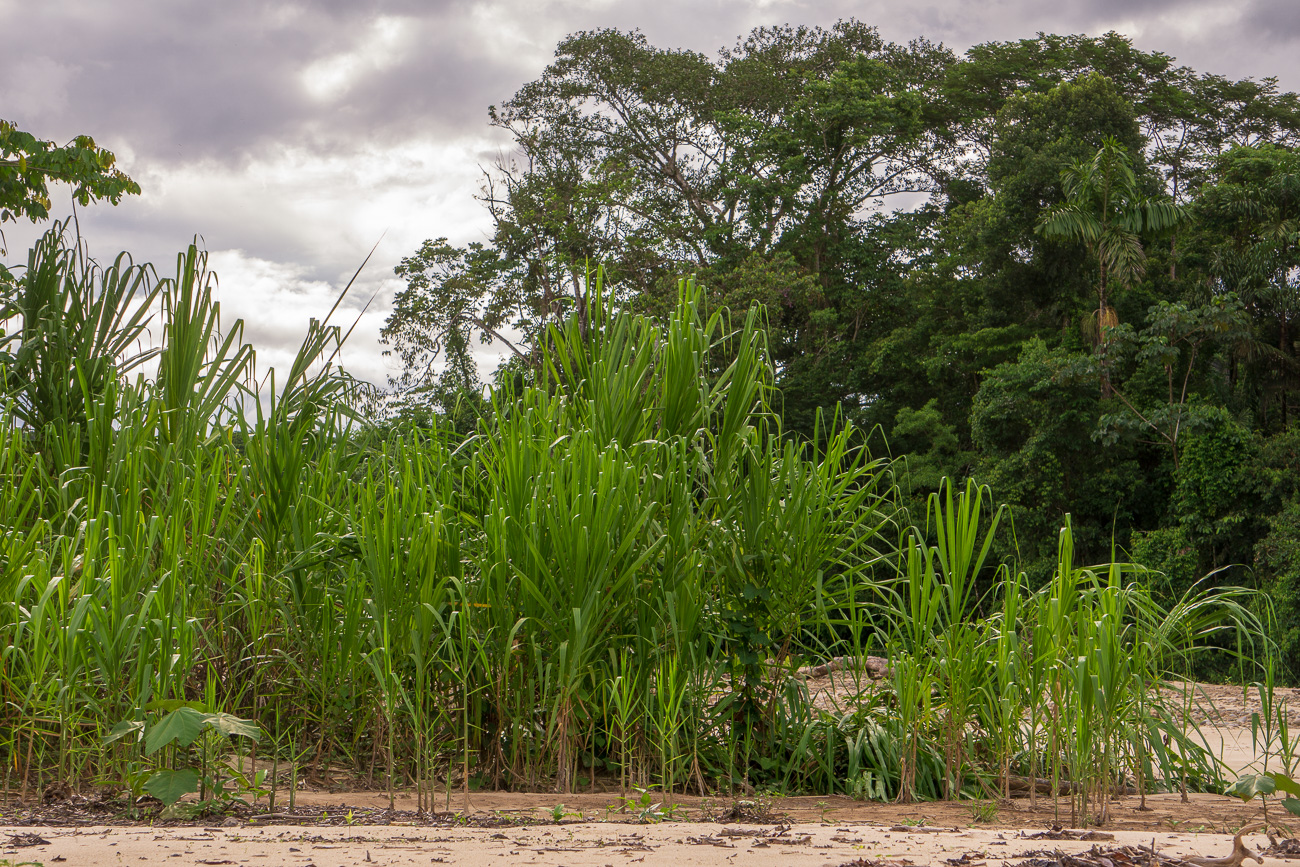 It’s paradise – if there weren’t the mosquitoes

Then we’re leaving to La Paz. We want to go hiking there and ride the famous “death road”. But shortly after our departure, there’s a little incident…